My How Things Have Changed!

About 22 1/2 years ago we went on our  very first cruise. It was a short cruise from LA to Ensenada and back. A short stop at Catalina Island and a day at sea for gambling purposes.

We had just taken a trip to Las Vegas (my first) where I talked Mel into getting a permanent in his hair.

So on the cruise we looked like matching mushrooms!

When we moved to the hinterlands of SLO county Melvin vowed to let both his beard and his hair grow.

Tonight at that lovely dinner we noticed that he had the longest hair in the place.

I swear it has grown two inches in the last week.

SO I took a picture of him.

You will note the picture on the wall of the matching mushrooms.

Things have changed a little in the last 23 years.

Posted by gizzylaw at 9:53 PM No comments:

When It Doesn't Go Quite Right 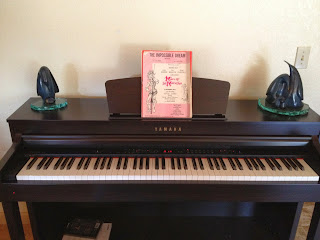 Remember my Christmas present from the Spouse?

I was SOOOOOO excited to get a piano again and so happy to be able to play with out disturbing people. (It has headset outlets)

I played it nearly everyday from the 15th until the 22nd of December.

Haven't touched it since.

Why, you might ask, hasn't the woman touched the piano since the 22nd of December?

The bass speaker suddenly decided to crackle and rattle when the low notes on the keyboard were struck. I could hear it over the PHONE it was so noticable.

Since I bought the thing at Costco I figured that should be the outfit to call. And I did.

They told me I had to bring it back to the store to replace it.

Now, in my most CONGENIAL of tones I informed the person to whom I was speaking that it was a PIANO and had been delivered to my home and that returning it to the store might cause considerable more damage to the item AND that it was under warranty AND that even if I could get it back it was a "road show" item and, thus they could not replace it as THERE WERE NO MORE IN THE STORE.

I was given a phone number to call Yamaha. (Yamaha had the warranty)

I called the number. It was answered by a machine that said that "I am out of the office until January 3. If this is an emergency please call ############.

I called the number given for emergencies. Yes, I know, it was not really an emergency but I figured it wasn't 991 so it wouldn't constitute making a non-emergency call to an emergency number. Besides, at this point my patience had left the building.

The emergency number was answered by a machine that told me to listen carefully to the menu as many items had changed.

I called this number several times trying a new menu number each time. I did that because there was no menu number for warranty or customer support or repair or ANYTHING that came close to the purpose of my call.

Eventually, I got a machine that told me (READY???)


That Yamaha Corporate Offices were CLOSED for the holidays!

Now I am getting pissed off. I just want to find out how to FIX the piano. This is not rocket science or even mathematics. It is, however, customer service. An Art.

The next call is back to Costco.

I delicately explain the situation to another customer service employee. She gets it. She gets a manager.

That young man asks for all the pertinent information: date of purchase, purchase order number (if I have it), date of delivery, and my member number. He requests that I send all of this to him by email and he will contact his Corporate Office regarding the proper contact at Yamaha.

I send the email that night.

I expected a phone call on the next business day to apprise me of his progress. As of yesterday- nothing.

I ask for the manager by name.

I briefly (no sarcasm- I was brief) told her that I had expected a call since I had sent an email directly to him regarding my issues.

He had been gone since that day. I was not told why (it really wasn't my business) But I was referred to another manager. I was given his email as well. I was told he would call me as soon as he was available.

I did apologize to this person because I had been a bit of a Christmas Boob. She understood and laughed telling me I was one of the easier ones.

Anyway, I forwarded my first email (the one with all the pertinent info) to the second manager and added that I was not expecting much as I had been lied to at every step in this process and frankly didn't expect a call from him.
(yeah, I was snotty)

I got a phone call yesterday. This manager had called Corporate, had call Yamaha , found the local repair person AND called him!

Tonight I contacted the repair person who says he will be here about noon on Monday.

My faith in humanity is gradually being restored! 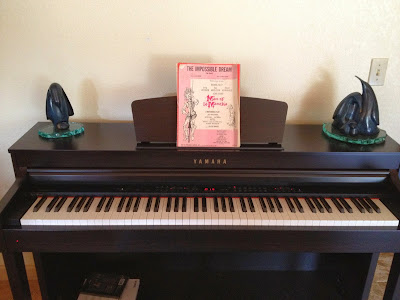 There it is. The piano.

All set up and ready to go.

But for me to make it go I had to find my old music.

I knew I had it because when we moved to the country I seriously contemplated throwing it all out.

It held a lot of memories.

And a little hope that I would play again.

So when the piano was delivered this morning I went to the box that said "MUSIC" on the side. I brought it out to the piano.

I sat down and opened the box.

And the memories came roaring back.

There was my Aaron Thompson, Grade One piano lesson book. Grade 4 was next to it. (Have no idea where 2 and 3 went to)


There were Etude books and practice (scales) books. There was an intact copy of the May 1954 Etude magazine with the name "Hanigan" in very precise script on the front. There was a hard bound book from 1947 of Stephen Foster songs inscribed by my Aunt Louise. (I believe that was a gift to my grandmother.)

There was a copy of the "Sound of Music". I had played that from memory for years. (although I had to do a great deal of reading this morning!)

But the one that REALLY got me?

A copy of "The Impossible Dream" from the musical Man Of LaMancha. 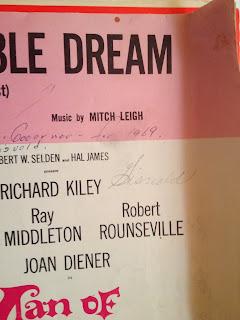 This was the copy that Virginia Hanigan gave to Dad as his theme song when he became Lieutenant Governor of California, Nevada, Hawaii Kiwanis Clubs. It was 1969. And she wrote his name on the front.


Dad sang that song at every Kiwanis Meeting that he went to  as Lieutenant Governor that year. I must have heard him sing it a hundred times.


I had memorized it and played it for him at home.


Playing it today was a little weird. I couldn't remember where my fingers were suppose to go.


Guess I have to practice a bit.

It's About the Music

I don't listen to radio music much and I can't tell you who the current artists are. But I have every Frank Sinatra song in my head. Peter, Paul and Mary live there as well--along with John Denver, The Righteous Brothers, the Weavers, the Beatles, Rolling Stones, Herman's Hermits, and a LOT of classical folk. There are a few off-beat jazz pieces in there just to mess things up.

(One of my favorites is called "Bitch with a Bad Attitude" Used it as my ringtone for years.)

Yeah, it's stuck in my head.

I often sing show tunes to people on the phone instead of saying hello.

And I always call my brothers on their birthdays to sing "Happy Birthday" as horribly as is possible without laughing.


For my ninth birthday my father bought me a Chickering Spinet Piano. I loved singing so a piano made sense. It stayed in the living room where I would practice (occasionally).

It was a major part of the Living Room decor and it was gorgeous. The keys had a great touch and the sound was pretty amazing.

So it was surprising to my entire family (and me) that I couldn't make a piano "sing". As Charles (on MASH) said, "I can play the notes but I can't make the music sing."

Off and on, over the years, I have had pianos of one kind or another. Good grief, I moved one to Sacramento when I went to law school!

But it has been awhile now. And I have missed having that instrument.

I might not be very good at it but it always brought me a measure of comfort.

It is about the music. It keeps me sane.

It says things through me that I can't express any other way.

It is a language that speaks to my soul.

Every time, every song (even the ones I don't like!)

So every Christmas I get a little nostalgic for that rosewood Chickering piano.

All of that is to give some context to my crying in COSTCO today.

You see, they had one of those traveling shows at the entrance. You know the type. Some major product or other that you can't find in many places. Sometimes it is clothes, some times it is jewelry, some times it camaras.

Today I walked in to get some catfood and canned peaches and there it was......A Yamaha Clavanova Spinet. With a dark rosewood finish.

Now a Clavanova is technically not a piano. It is electronic. There is no sound board. But it has an 88 key keyboard with grand piano touch. It will play recorded music (from wav files) and it will record what you play (if you want). Oh, I wanted it. It was small enough to fit in our little country home and it sounded fabulous. (yeah, I played a few notes)

But I walked away. I couldn't afford it. Not right now. And besides, Melvin would kill me (figure of speech use of that phrase)

Now Mel had been asking me what I wanted for my birthday. And I didn't know.

I called him. And, being considerate of his feelings, I shaped remark saying that I knew we couldn't afford it, BUT there was this Yamaha piano at COSTCO.

To my astonishment he asked how much it was. I told him and again let him know that I knew that we couldn't afford it.

He had been saving.

And that is why I was crying at COSTCO today. Big drippy tears.

The piano will be delivered on Sunday. 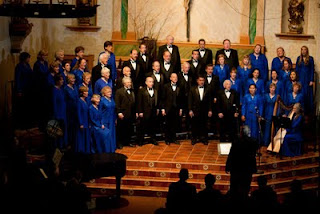 Now I have been with the Vocal Arts Ensemble for nearly 8 years. You would think I would have a current photo of the group.

The best I have is this one from a couple of years ago.

But this weekend? This weekend this group was anything BUT pathetic.

We kinda took the roof of the place on a couple of pieces.

Two shows (Saturday Night and Sunday Afternoon) that were both sold out! Like you couldn't buy a ticket at the door!

That really energized us and we sang our socks off.

Sorry if you missed it but we have another coming up in the Spring.

Stay tuned for our next episode!