Zelda had surgery yesterday. A large unknown type growth on her gums and a lot of warts. She also had her teeth cleaned.

It took longer than the Dr. expected so we got a couple of phone calls in the afternoon about the progress.

But at @6 she was ready to leave that place.

The doctor doesn't like the plastic dog collars. So while I was trying to figure out how to keep her from licking the sutures on her belly the assistant walked in and said she should stay warm for the next couple of days.

It is still freezing up here at night.

Style By Zelda. Of course!

A white T-shirt and hair ties....Simple.

It took a little custom fitting but she was too stoned to care at that point.

Zelda has never caught a gopher. She smells them. She digs for them. She stares at the gopher hole.

But never a gopher. 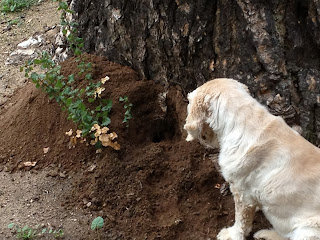 She is very patient. She will sit there for hours. Through rain, snow and heat. Waiting.


But in the last two weeks or so she hasn't much wanted to go gopher hunting. Odd behavior for our Zelda.

In the last month or so, she has moved off our bed to sleep on the cold floor. Odd behavior for our Zelda.

In the last few weeks she doesn't want to go outside or go for walks. Odd behavior for our Zelda.

In the last few weeks she has had a ravenous appetite. She will eat anything. Odd behavior for our Zelda.

Then yesterday one of her warts (she is prone to them) swelled and burst.

Off to the vet.

We were a little apprehensive about this vet hospital. We had taken Mohawk there once a year ago for an emergency.  We did not know how they would be with Zelda over just a swollen wart.

Well, we needn't have worried about that.

We should have been worried about her little pot belly, her lethargy, her appetite, her disinterest in exercise.

They found a growth on her gum that we are hoping is benign. They say the warts have to be excised and, oh, by the way, Zelda has Cushing's Disease. Usually caused by a microscopic tumor on the pituitary gland it causes an over production of steroid hormones.

It is literally poisoning her.

And, as a side effect, she has a urinary tract infection.

If you want to know more about Canine Cushing's Disease go to www.kateconnick.com/library/cushingsdisease.html .

So on Monday, Zelda has a date with the dog surgeon to remove and test the growth on her gums and remove all her warts. After that she will get antibiotics and then we decide how to treat the Cushing's Disease.

It is so hard to think of her as an older dog. But she is 10 now and she has experienced a lot of change this last year.

I hope she feels better soon.

She needs to catch a gopher.
Posted by gizzylaw at 5:26 PM 1 comment: