IT ISN'T THANKSGIVING YET!!!

I was raised with one strict, immutable rule.

It was not to be broken under any circumstances.

No one ever broke it so I don't know what the consequences of such contemptible behavior would have been. But the mere thought of the possible consequence placed fear in the heart of every child in the house.

The Christmas decorations DO NOT come out until AFTER Thanksgiving. No lights, no tree, no tinsel, no cloth elves, no ivy. NOTHING.

So on Thanksgiving night or the day that we got home from Aunty Doo's house, all the cornucopias, waxed fruit, paper turkeys, color leaves, and anything that was orange, brown or gold was vanquished to their appropriate boxes.

What an incredible collection of Christmas Kitsch as has never before or since existed.

It took the rest of the long weekend to get it all up.

It was so bright outside that I could find my way to my house on a dark, Tule fog night just by the glow!

So, every year that I have had my own home, I have judiciously followed the rule. Even in the years where I had to do all the work.

The house would be strewn with real pine wreaths covered in bows and beads and tinsel and flowers. Every flat surface would be covered in a themed cacophony of  kitsch. One table was all porcelain Santas in a field of snow. The next, elves in a musical tableau.  One a religious nightmare of tin and hay.

AND THE TREE!
Covered in ornaments of all shapes and sizes. Paper, glass, wood. Commercial, handmade, and heirlooms. Lights-some years large, some years small. Some years white, some years multicolored. Some years had strings of bubble lights or penguins, or chili peppers. Ever inch covered.

Then there was the year of the shaving cream........I would rather not talk about that one.

But always, ALWAYS after Thanksgiving.

I went into the "storage" area under our house. And I saw them. Four giant and three not so giant plastic tubs labeled "Christmas".

And I thought to myself, "Hmmm, I will need those on Friday. I can get them out today."

And then I opened one.

So I started to pull things out.

I tried to figure where they would go in the new house. What would fit and what wouldn't.

So I HAD to take some into the house to see for sure.

And then they had to have the cotton snow around them to see if they would look right.

AND IT ISN'T EVEN THANKSGIVING YET! 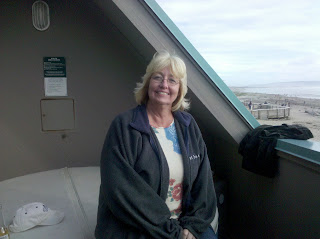 Today is Vicki's birthday. She is officially one year younger than me for the next month.

I have told our story before.

But today is SPECIAL so I thought I could share another story about her. After all, embarrassing her is the best present I could give, right? (==giggle==)

I know that this particular story took place when we were in our late 20's. My spouse was flying in a B-52 somewhere over VietNam (or Cambodia- but that is another story) so I was in Lindsay. I was living with my parents at the time. Vicki still lived there.

Vicki and I decided to go play tennis.  And we invited my mom to join us. We figured she would sit under the sycamore trees and watch. After all, we only had two tennis rackets. And it was rather warm that day (if my memory serves me-which occasionally it fails to do. Memory does take a vacation every now and then)

When we got to the courts, mom wanted to play so Vicki and I ended up switching off to play her.

After about an hour or so, Vicki and I were sitting on a bench. Sweating. Breathing HARD. Tired.

Mom was jumping around on the other end of the court yelling, "What's the matter with you two? Let's play!"

Vicki looked at her, looked at me and said something to the effect that we were out of shape wimps. I don't remember the exact phrase.

I do remember Vicki's smile and my mother jumping around on the court. Racket in hand.

I do remember thinking that I had a perfect friend who would share my humiliation that day.

And Another One Passed THE TEST

Several years ago, a young man walked into my office and asked for a job.

He was attending the local law school (if you wanted to call it that) and wanted some practical experience.

Now I am the world's WORST interviewer. I have never been interviewed for a job and I have no idea how they are suppose to go.

But I asked a few questions (finding out that he was attending that dreadful place) and he seemed nice and was obviously VERY smart.

I didn't really need anyone except to do gofor work or to help out the kid at the front desk.

So, I did what any good boss would do. I asked the kid to talk to him. She had done lots of interviewing of prospects at her old job and she has a knack for picking the right people.

I almost fell out of my chair laughing. I got up and walked over to them, pointed at him and said, "You're hired!"

The young man was Angelo.

He spent about 6 months with us (before I ran out of funds to pay him) and he became a family friend.

He and the kid took the First Year Law School Exam together and both aced it.

Then he realized that he wanted to go into Patent Law and he needed serious law school credentials to get there. He quit the local school and applied to Santa Clara School of Law.

It drove him nuts and made him really work but he made it through and graduated last May. He took the Bar Exam this summer.

And today he got the notice.

Angelo is a lawyer.

It is his day but I feel so proud of him. I feel like a parent to him. And my heart explodes at the thought that he made his dreams come true.

Today is your day, Angelo.

Thanks for letting me be a part of your life.
Posted by gizzylaw at 9:29 PM 1 comment: