I have been on this earth for "several" years.

I learned to cook in my own home as a child.

I learned to clean a kitchen in my own home as a child.

I was there when my parents had a dishwasher installed.
I learned to use the dishwasher. Without incident.

I learned a great deal during those times of tragedy.
Do NOT talk to Mother.
Do NOT talk to Father.
Get outside as quickly as possible without them seeing you.
Never mention the plumber.
EVER!

I learned, also, not to put peelings of any kind (vegetable,  mineral or animal) in the garbage disposal.
Doing so brings the plumber and communication will cease in the household.

So, as I cleaned the kitchen this morning.....Well, wait. You need the whole story.

Last night Melvin asked me to make some rice. We have a rice cooker which I have used maybe once or twice. So I ask Melvin for the ratio of rice to water for proper use of the cooker. I know that in a pot it is 1 to 2. But a cooker is a bit different.

Melvin says, "2 cups of rice and 2 cups of water." I thought that was a bit strange so I reaffirmed his statement.

I then followed his instructions.

The rice was a TAD on the dry side. He ate some. I didn't.

We had a discussion regarding the TWO cups of rice. It turns out that the rice cooker came with its own cup. It measures 1/2 cup. So, when Melvin said two cups of rice he meant THAT cup. When he said two cups of water he meant the regular measuring cup of exactly one cup. He assumed that I understood the difference between the cups.

I am old and blonde. I did not get the subtlety there.

Meanwhile, I was cooking some fish that I had purchased the day before. It was Dover Sole. Or so they said. It turned out like the rice.

I had a bagel and cream cheese for dinner. (Much better than fish, if you ask me)

So, as I cleaned the kitchen this morning, I took the bowl from the rice cooker and dumped its dry, disgusting, hard contents....

into the sink with the garbage disposal.

I turned on the said disposal.

I remembered my lessons.

I informed Melvin and then ceased to communicate. I took the dog to the vet. (She needed another blood test)

I called our friend the erstwhile contractor/handyman for two lawyers.

He had done the unthinkable. He had torn the pipes apart. He had found the rice cement. He had removed it. He had put the pipes back together. (In proper order) And then he cleaned the kitchen.

I shall NEVER cook rice again. (Thinking about the same for the fish)

I am a lawyer for a very, very good reason.

(CORRECTION) IF I MUST

Melodie got married today. And it was the most un-traditional, wacky, fun wedding I have ever attended. And I was sober!

It was on the outdoor patio of a restaurant in Cambria. The temperature was suppose to be a bit nippy at 65 degrees. The forecast forgot to mention one small item-----

But we got lucky. Ninety-five percent of the patio was covered.

My friend Kathy cut ribbon. By the way, Kathy hates to have her picture taken so I had to take this one and post it because....well, because..... 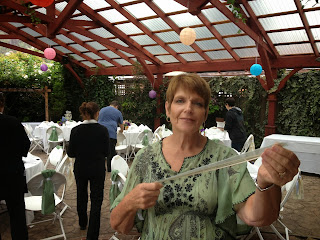 Note the material on the back of the chairs. They turned into this. 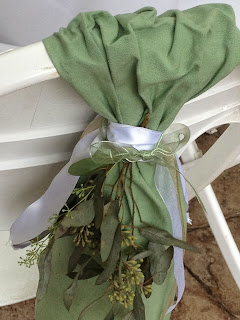 What is it? Green (or cream) tea towels with white, green and gold ribbons and a stem of budded eucalyptus! 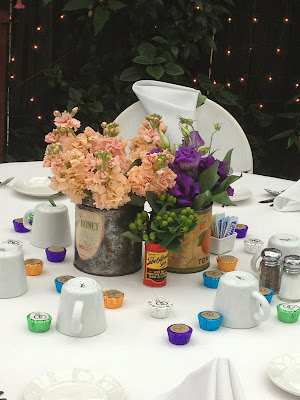 An assortment of tin cans with various cut flowers and CHOCOLATE CHEWS!

I really don't know which one I liked best. But each table was different and stunning. 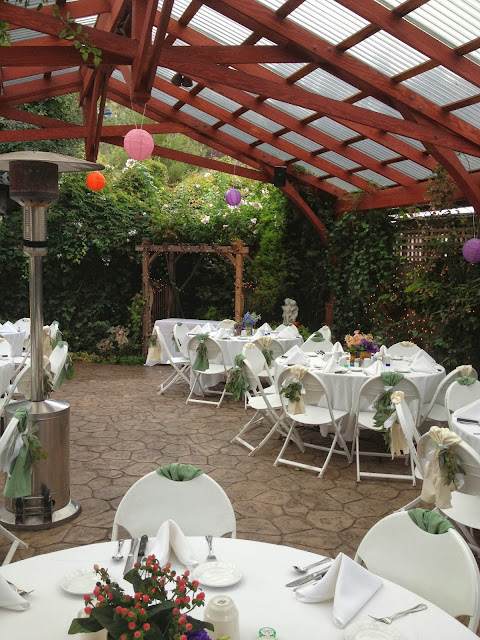 And then the fun started..
People started showing up. The bar opened. The appetizers appeared. And everyone boggled at the men's attire.

There is a story there. You see, Melodie wanted her dear friend Patrick as her witness. That made him the Maid of Honor. Since, according to tradition, the maid of honor must wear a dress, the entire male portion of the wedding party decided to wear the next best thing--kilts!
Now Melodie's friend Keliki performed the ceremony after filling out the right forms with the County of San Luis Obispo. She had never done this before so she had a bit of studying to do.
But the best part was when dear JR, in response to the "do you" question, answered (almost with a straight face) "IF I HAVE TO MUST".

The entire place erupted in laughter and my Melvin was heard by all when he (rather loudly) labeled the answer  "Rookie Mistake!!"

They finally got married. 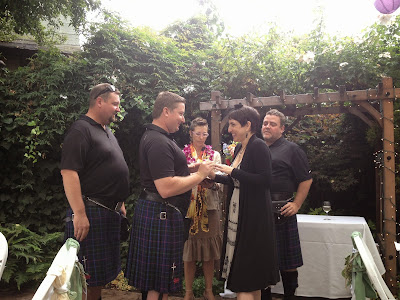 And the people stuck around. Eating, drinking, talking, laughing. But the best part for me was that all of Melodie's family was there.

Oh, and, as you can see, the rain stopped.