The Day Is Coming

I have spent the last 30 years doing something I dearly love.

Since 1985 I have worked as a criminal defense attorney to the poorest, sickest, most loathed communities in our country. I listened to their stories and I tried very hard to keep the power of the government from totally destroying them.

I have always believed that if a government is going to charge a person with a crime then that government should also afford that person the best defense possible. Otherwise there is not justice. And that word does not mean "just us".

It means to equitably and compassionately treat each and every person who comes before the court. The mentally ill, the poor, the physically and mentally disabled--everyone should be treated with the same care and support.

But there are people that I will never forget.

The first that comes to mind is a young man who is sitting on death row in San Quentin prison.

There is the mother of 2 who spent 8 years in prison for killing her abusive husband.

A young man from LA who protected his 16 year old niece from her other uncle.

A father of 4 who tried to stop a parolee from attacking him.

Those are just the first murder trials that come to mind. Only one was convicted of murder. One was completely exonerated. The other two were convicted of lesser charges. And of those two only one went to prison.

From 1986 to 2000 I worked as a Public Defender. I was not given a lot of respect for the rest of the legal community. To them my job was dirty. But it is the one that I believe deserves the most respect. It is difficult but very human work.

It was trench warfare. Always trying to protect my client from the powers that would put them away for life (or worse) if I didn't do my best. Days full of courtrooms. Nights full of research and writing or just plain thinking. Rare were the times when a case did not come home with me in my brain.

Firmly in trenched in my mind was that for our system to work properly the government had to PROVE its case. No hiding evidence, no relying on someone's belief. It required proof. And my job was to challenge that proof. To make sure it was proof.

All tolled, I tried over 250 felony cases. I have no idea how many misdemeanor trials I did. I used to say I had tried everything from illegal fishing to capitol murder. And that is true. I won some and I lost some. If the system was working properly, I should have lost around 90 percent of the time. But I won more than my fair share of cases. Which to me meant I had to keep doing my job until everyone got it that accusations were nothing without PROOF.

I fought with judges, District Attorneys, probation officers, witnesses, clients and myself. And I persuaded a lot of jurors.

I stayed awake at night and paced through my days.

And I loved it.

I loved the game. The theater of it all.

And then, I didn't. The fire in the belly was gone. Exhausted.

I began losing my temper at DA's and judges. I lost patience with my clients. I lost more sleep than usual.

I began to show to others the disrespect that I perceived that I had received from them or others in their positions. I have always been a bit arrogant but I was crossing the line at this point. And I didn't want to be doing that.

I began to dread going into the courtroom. It wasn't fun anymore.

I had proved that I was good. Very good, in my humble opinion.

I proved to myself that my parents would have been proud of me.

I proved that I could stand up to those in power and speak truth to them.

I proved to myself that every person on this earth is a human. And that there but for the grace of God......

I understood, finally, that my upbringing was a thing to be cherished. It was a thing that few of my clients could ever imagine.

I understood, finally, that having my advantages in life was a gift not to be squandered. Because there but for the grace of God....

And I FINALLY, FINALLY began to see that my existence, my identity had little or nothing to do with being a lawyer.

The struggling to become a lawyer and providing for my child made me who I am today.

The struggle to be good at my craft made me who I am today.

I stand tall, sure in who and what I am because I BECAME a lawyer. Not because I am one.

The profession taught me to do what I could and leaving the rest.

And so, I am leaving the rest to those who still have the fire in the belly. To those who want to make their mark. To those who are willing to and able to fight the system from within its borders. To those who can still listen to the stories and not lose themselves in them. To those that can, and will take my place.

I will take a case or two now and then just so I remember all of the above.

But that case will have to wait awhile.

I need to spend some time with the spouse and with myself.

I will putter for awhile. I intend to volunteer for the Wildlife Rescue folks. I intend to continue learning to weave. I WILL continue to sing. 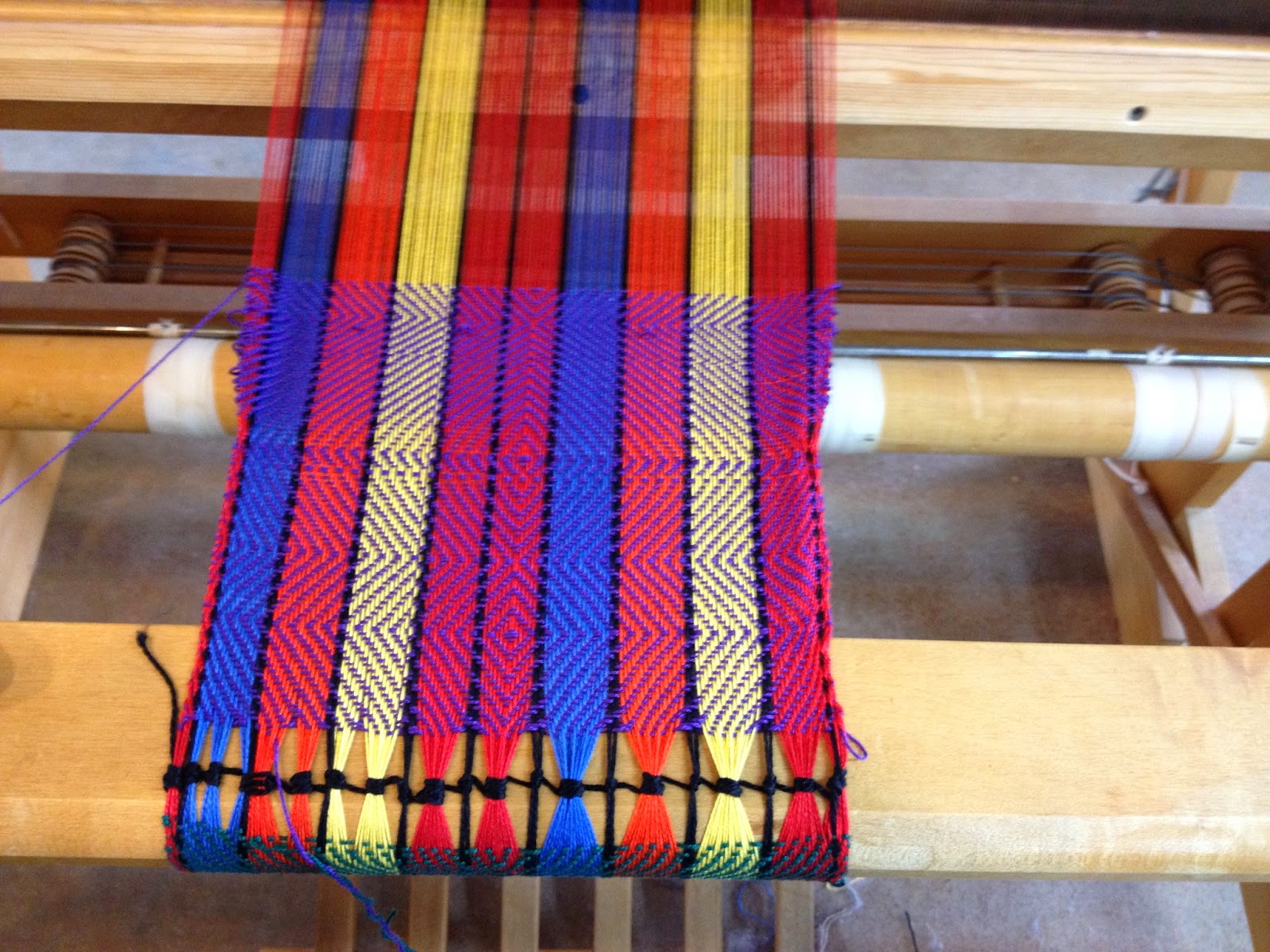 But when the fire begins to kindle again.....well, the young'uns can use a bit of training from the old lady!

In high school I was a bit of a jock.

Now back in those dark ages, we "girls" were not allowed to be involved in competitive sports. That was much to "masculine" for the female of the species. We were not to be competitive or physically active. I actually remember a teacher telling me that if I keep running my ovaries would be damaged.
I didn't know what an ovary was at the time. But the statement was accepted as the way things were.

And I kept running. Cuz I didn't know what an ovary was or what it's role it had in my life.

We had teams in volleyball and softball and basketball.

But we could only play other schools at GAA (Girl's Athletic Association) "Play Days". Just round robin types of tournaments with no winner or loser.

But I played in them all.

Shoot, as a little kid I was center for the Linda Vista Gang football team. Until I turned 9 and my dad forbid me to play with the boys.

I had no interest in home economics.

I vowed to not learn to cook or type or sew.

I have written about this before but I never realized that it was ok to let go of that rigid thinking until now.

I went to law school when it was still an old boys school. I practiced in an area of law that was male infested. (Maybe not the best choice of words but it made sense at the time.)

And today I spent my second day learning to weave cloth.

And I didn't even notice the time passing.

I was working a puzzle. I was being analytical while I sang to the music that was playing.

It was really fun.

And day 2 ended with the loom looking like this: 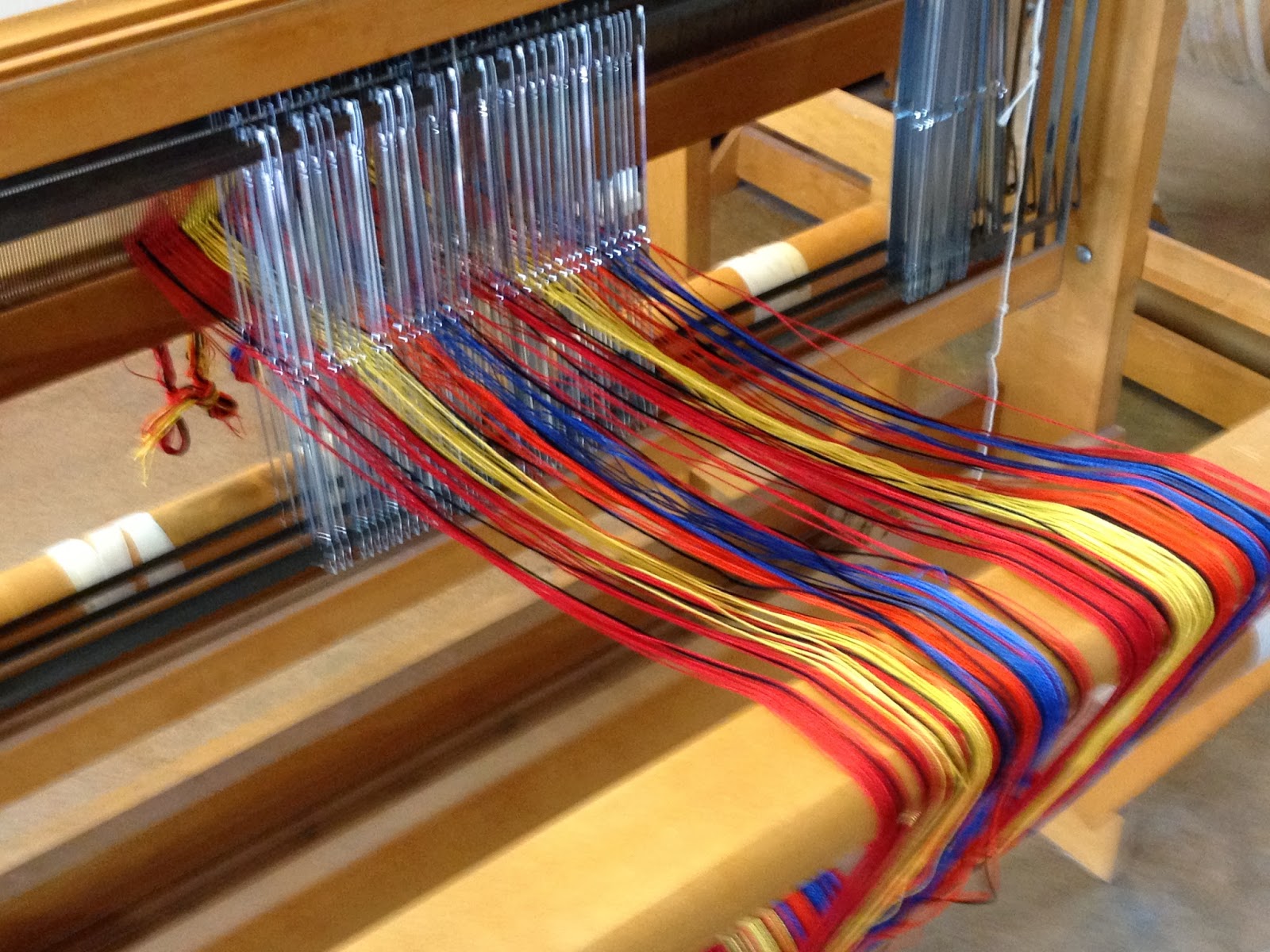 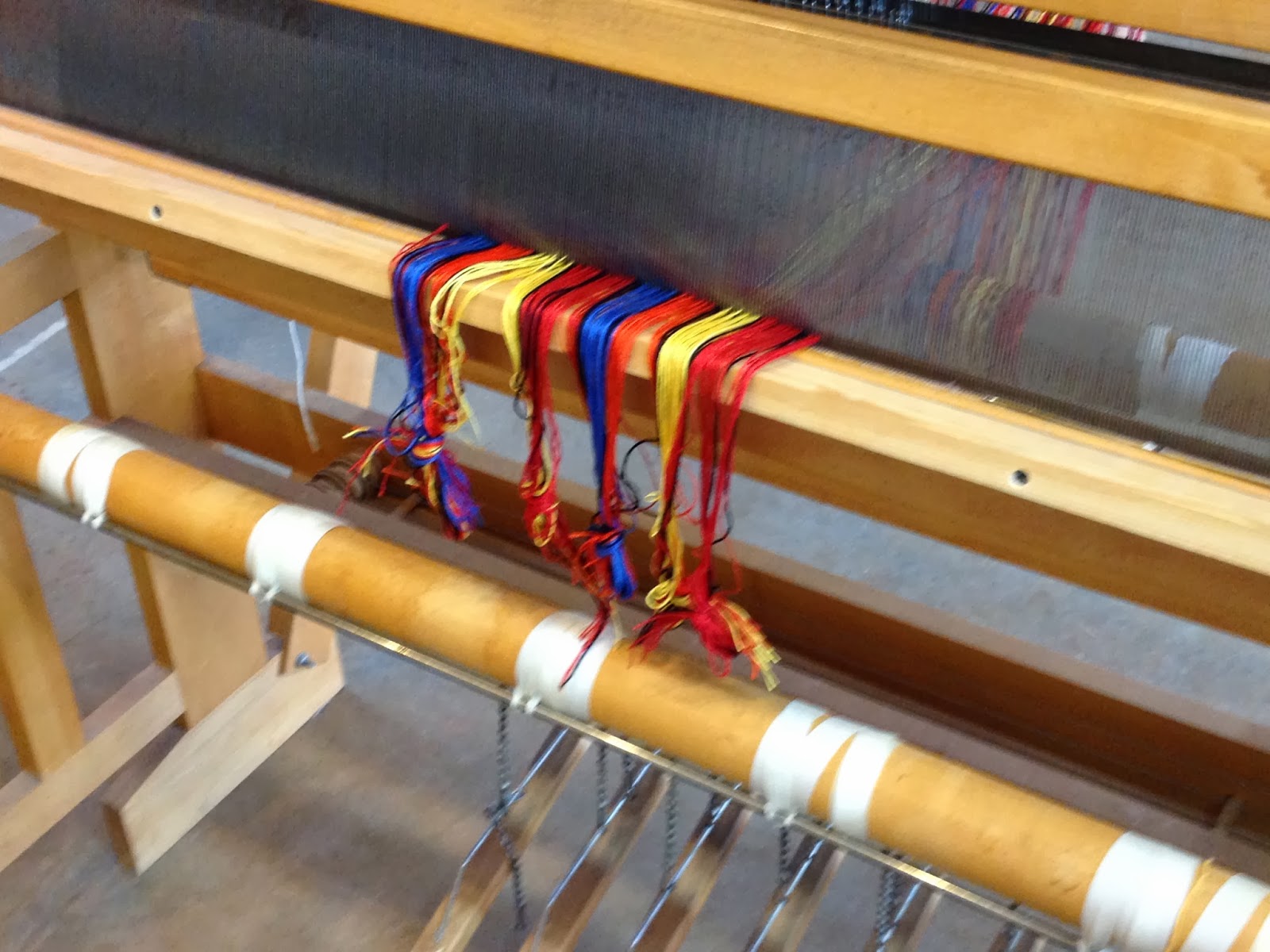 And a threaded reed.

Took me all day and I never noticed the time. Not once did I look at a clock or even my cell phone. I even forgot I had a cell phone!

I swear it is a mixture of jigsaw puzzle and suduko.

Tomorrow I get to begin the actual weaving.

I have been considering my options.

Age is beginning to show its not so ugly head and I wish to do SOMETHING other than irritate District Attorneys, annoy judges, and visit with the disenfranchised and unwashed.

This is not to say that on any given day those activities would please me greatly.

But I would like to do them in jeans and a sweatshirt.

Not a suit.
Not with makeup.
Not with dress shoes. (they hurt)

Actually, I would like to do them from the comfort of my own home.

But, alas and alack, that is not possible in the current space/time continuum.

Besides, the spouse would not look kindly upon such persons showing up at our door. According to him we moved to the country wilds for a reason.

(Come to think of it, I don't know if DA's or judges would survive the attacks by birds, deer, rabbits, squirrels and the occasional fox or two. Never mind the neighbor's chickens. But that is another dissertation.)

So I have been considering options.

What to do with myself should I not appear before or next to, my nemesis(es) ever again.....

I am trying my hand at crocheting. A turn at cross-stitch was taken.

And, of course, there is the every present jigsaw puzzle.

So, I continued my research. And I discovered that there is an entire community devoted to weaving.

Now I have never seen a fabric loom up close. The closest I ever got to one was watching Norma Rae at the movie theater.

But I, being the resourceful and independent little cuss that I am, found a weaving class.
And today I went. And I had a blast!

This is what I did today. 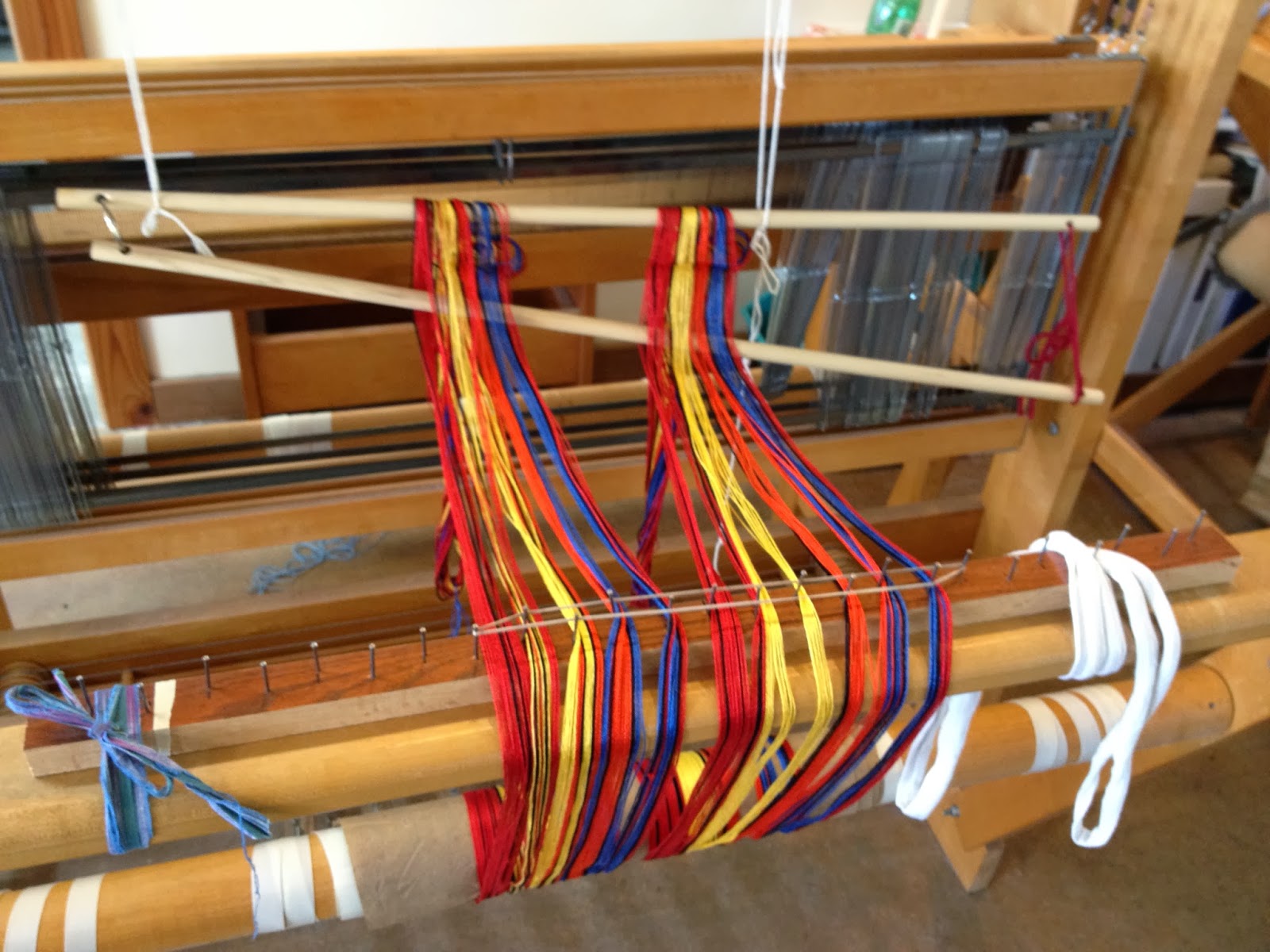 Every little part of that loom has a name that doesn't sound like it is English. For instance, tomorrow we thread the headles. The thread that is wound on the loom now is called the weft. And putting it through the headles puts the weft in position for weaving. And so on and so forth.

But I haven't had this much fun doing something other than singing (or dressing down a DA) in ages.

And at the end of this series of lessons, I will have a scarf.

A scarf I made myself.

And, NO, I am not giving it to Superman.

But I guess if you think about it, the guy I married has put up with me for quite some time.  And if I decide to stay home it could be detrimental to his solitude and well-being.

But he will do it.

That makes him pretty super!
Posted by gizzylaw at 5:43 PM 1 comment:

She Is Up and Running 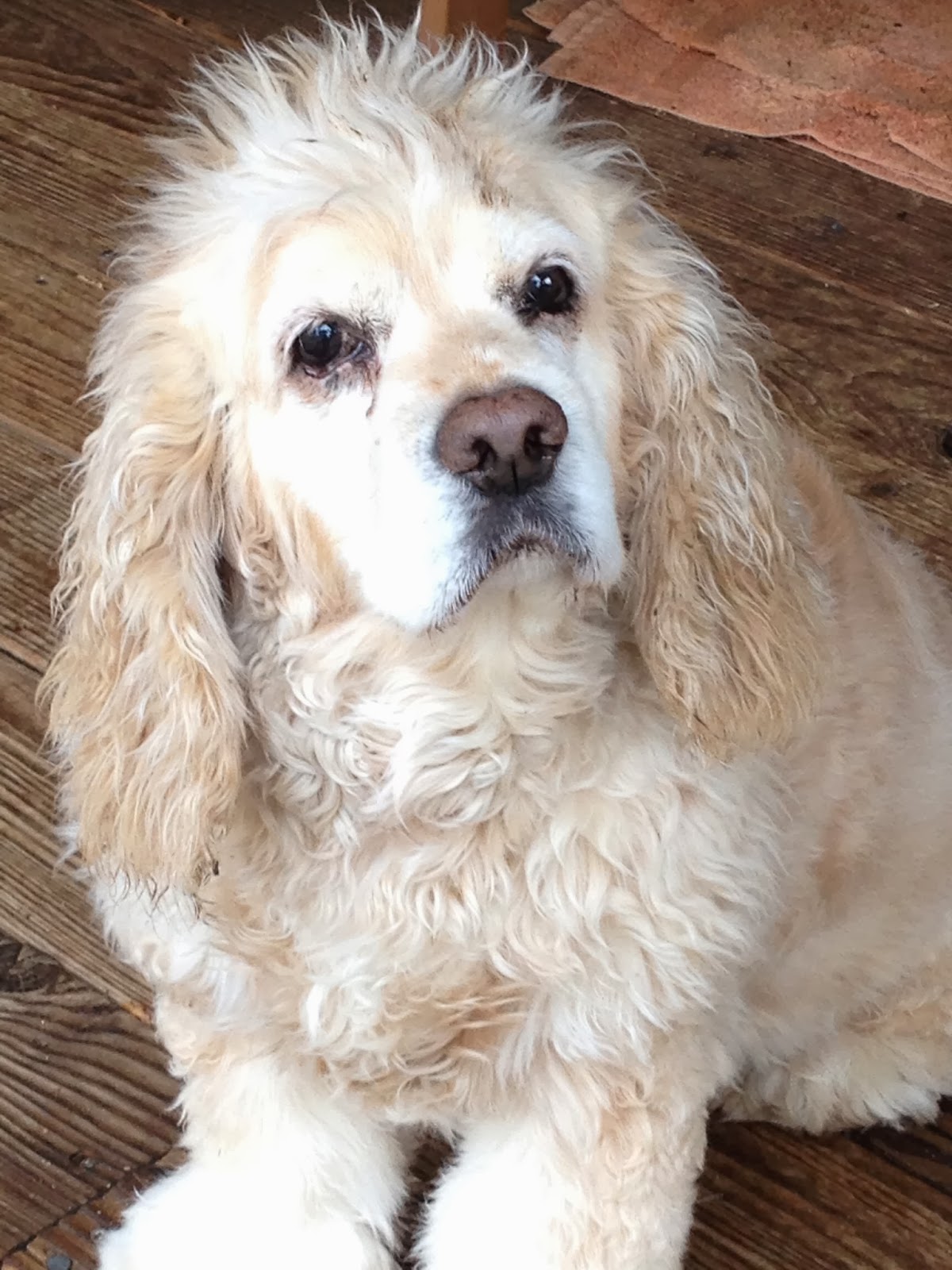 But she had another cone.

In the middle of all the Cushing's Disease stuff the vet noticed a wart on her eye. And it was infected.

She had conjunctivitis. (Yeah, she showed Bob Costas how to do it!)

Best solution? A bit of eye surgery (and a teeth cleaning).

Since they used the thinnest of sutures, she could NOT rub or scratch or touch her eye.

Thus, for ten days she had "THE CONE".

(He also took off a wart on her cheek cuz she looked prettier without it!)

We had a new dog.

No more lying around ALL day. No more hanging her head. No more lethargy.

She is chasing squirrels and feral cats and rabbits.

She is charging out the door ready to do battle.

She is trying to sneak down the road or back up the mountain.

She is still deaf (or her not listening skills are better than the spouse's).

But she sees better.

She is up and she is running. Everywhere.