I had a very, shall we say, "protected" childhood. I was born and raised in the same town, in the same house, with the same neighbors and friends until I left for college. I always knew who was who in the social structure around me.

So when I went to college with my best friend, I was flummoxed by people who didn't act or react like all the people that I had ever known. I didn't adapt well to new stuff. Somewhere in my brain it was suppose to stay the same no matter where I was.

And when I tried to get people to act like I thought they should act (in my little world) I was stunned that they didn't.

But I learned, eventually, that I was not the center of the earth (I am still a little off-center) and that all those other people had stories to tell and places that had molded them.

And through it all, I had a friend.

Someone who was always there when I needed a voice or a shoulder or a "talking to ". 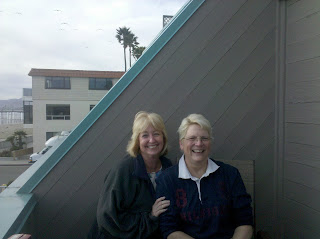 She still calls me "Gizzy" and she still laughs with me.

She remembers how I acted that horrible first year in college because she was there and was the bright and shining light that kept me attached to the ground.

Today, I called her. Just to say "hi" and to tell her what my latest blood tests had revealed. Nothing serious but a call to lose the weight and get my big keester off the chair.

I have never laughed so hard about dieting.

If there is one thing that marks our relationship, it is laughter. My mother (and hers) would always have to tell us to knock it off and go to sleep when we stayed at each other's house.

My husband will tell you that if I am on the phone and giggling I am talking to Vicki.

So today, as usual, she was there for me and, well, I just wanted to thank her.

Vicki, I love you!


One year ago today, I came home from work and Melvin and I had to make a decision. LadyBug could no longer lift her head, even to greet me. And Mohawk had lost the use of his back limbs.

I called the vet in Arroyo Grande and their whole crew stayed until we could get there.

And we said goodbye.

I miss them. And Zelda misses them, too.

When they were little, we would take them to a local school yard and throw a tennis ball for them. They would race to get it and bring it back. We would throw that dirty, smelly thing until they just lay down and quit.

We had learned not to take them to dog parks. The danger of ill trained dogs and untrained owners was more than we would let them face.

We had them trained at the All American Dog Kennel. The first command they learned was "Wait". They never forgot that word. Or the word "Food". They NEVER jumped on anyone.

If they got out of the backyard, we would go after them only to find them resting on the front door step. Waiting for food, of course.

They sat in my chair with me at night. They slept on our bed. They terrorized the cats.

They were never apart after we let them claim our life.

They were our kids, our pets, our friends.

They have been gone for one year.

I hope doggie heaven is full of tennis balls and they are never tired.

When I was quite young, I was introduced to card playing.

I mean quite young.   Less than 8 years old.

I wasn't introduce to this serious form of gamesmanship by any of my male relatives or friends.

No. My brothers and I were introduced by our great-grandmother, Barbara Roth Flynn. We called her "Cese". (The C is pronounced as an S)

She was a tower of a woman. One of the last of the Victorians.


She stood at least 6 feet tall. And she had the will and stamina of a Percheron stallion.

She outlived her husband by several decades. And in her widowhood she enjoyed many female friends. And one night a week, four of them  would meet.

A nice "friendly" game of Canasta.

Mind you, the youngest of the girls (in chronological age) was in her mid 80's!

Occasionally I would be visiting her with my brothers (who drove us there) when one of "the girls" was absent or unable to complete the game.

This was not an excuse to end the game prematurely. Oh, NO!

One of the great-grand kids was enlisted to fill the empty seat. And we were expected to play well. VERY well. Until the game was done. One, two in the morning.


So we learned Canasta.

I was reminded of all of this yesterday.

I was invited to a brunch in Morro Bay by my childhood piano teacher. Her name is Virginia Hanigan. 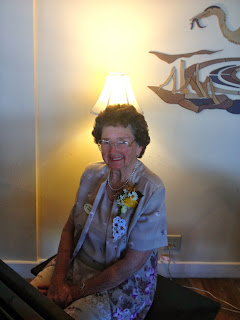 It was a brunch to celebrate the 30th anniversary of the founding of the Morro Bay Chapter of PEO. Virginia had help to found the group.

PEO is an organization of WOMEN dedicated to the EDUCATION of women. A powerful idea and group.

And so about thirty women ate together and reminisced about their chapter. Some were in their 80's and some just out of college. A fabulous mix. And the whole thing was great fun.

And at the end of the meeting Virginia walked over to the piano, sat down and played a piece for me.
And  this is what she said:


"That's one of the pieces I had your grandmother learn"

Cese's daughter had taken lesson from Virginia, too! Something I never knew.

There is something about women. The life histories that are intertwined and remain with us forever.

So, yeah. There are times when I just like being WITH THE GIRLS.
Posted by gizzylaw at 12:47 PM No comments:

Around here there are as close to four seasons as you can get in Southern California. (I consider this south as it is south of Monterey--It really is Central Coast but that is a little too narrow for the thought to work...)

In any case, the temperatures have not been out of the eighties in a couple of weeks and the nights are in the forties. We had a morning temp of thirty-five a few days ago.

The leaves on the fruit trees are turning and falling. The squirrels are fighting for food. The rabbits, hares and deer are turning brown and black. The air smells like fall.

But my rose bush doesn't know it. It decided to provide the appropriate color for this month: 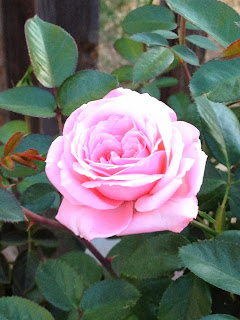 Please donate to whatever charity you like that supports breast cancer research.

My rose made a special effort to ask you.

Posted by gizzylaw at 4:33 PM No comments: