As I have said before, and I now say again, I was not meant to be domesticated.

In school I was always the competitive, athletic tomboy.

I played baseball and football and basketball.

But custom dictated ( through my parents) that I wear dresses and skirts.

I learned how to cook fancy meals (but couldn't make pancakes or mash potatoes).

I REFUSED to admit that I could type.

I REFUSED to admit that I knew how to clean a bathroom.

I REFUSED to admit that I could cook ANYTHING.

I wasn't that kind of girl.

I was headstrong, determined, and I was gonna be just like the boys. PERIOD.

Eventually, I became a lawyer and played in the big-boy courts. I had other people clean my house. I ordered a LOT of pizza and Chinese food. I even (at one point) sent out the laundry! I was just as busy and harried and impatient as the big boys.

And something has been happening.

The KIDS were coming for dinner.

So I got up and made home-made Cheez-its. And clam dip.

While waiting for the home-made Cheez-its to finish baking, I made the salad and the meatballs. I warmed (very slowly) the spaghetti sauce. I made sure the lemon pie was perfect. Then I made the garlic bread. I set the table with place mats and napkins.

And while I had a minute or two between those chores, I finished Melvin's scarf. 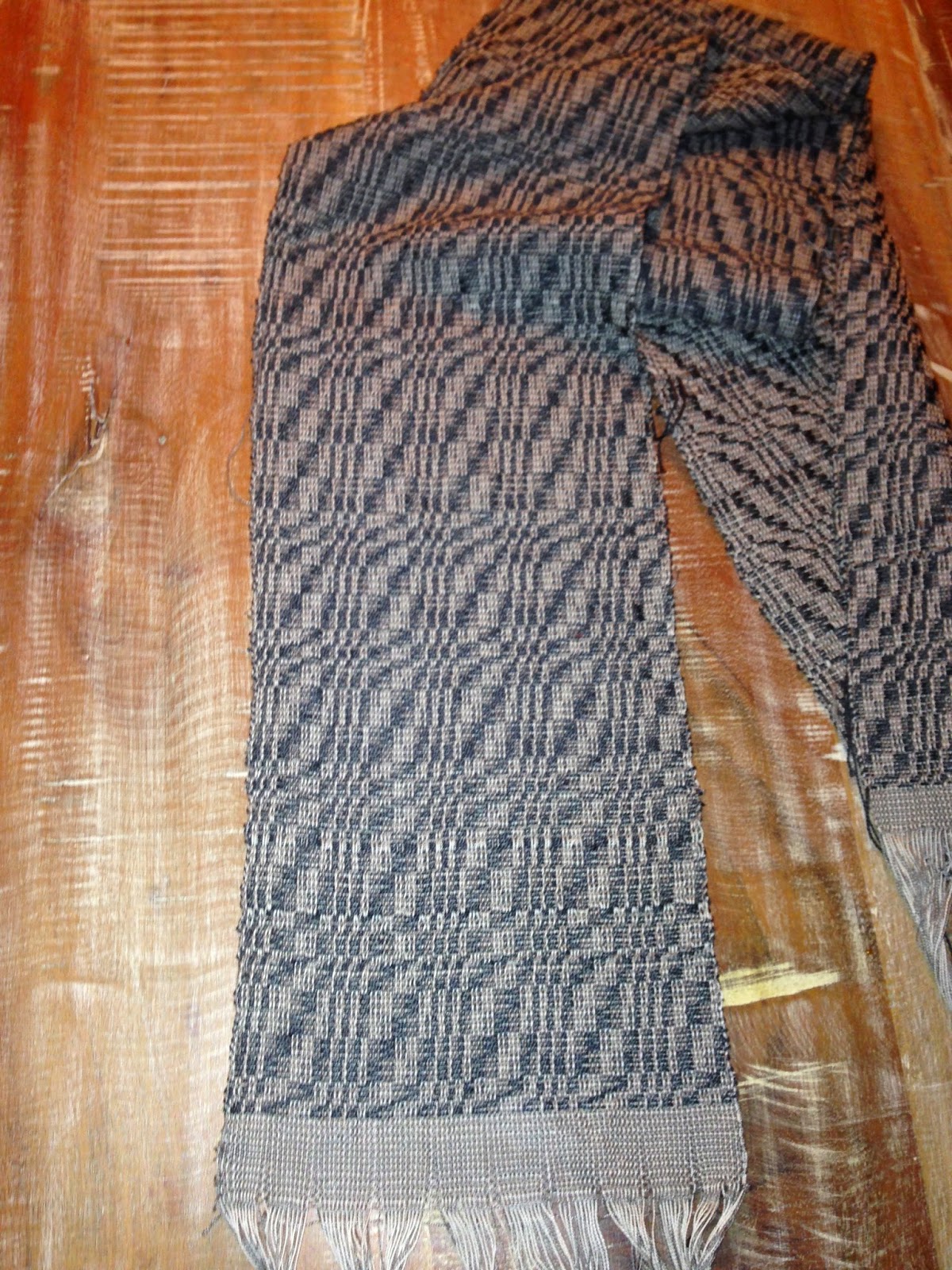 Oh, I typed out this little missive.

Harley Boos and the Mueller Dogs

When we moved to the Central Coast we had a plethora of pets. The dogs (Mohawk, LadyBug and Zelda) and the cats (Diamond, Putter and TeezaButts) had always had a great vet in Bakersfield. Dr. Lohr was amazing with them all (and their predecessors).

But we didn't know any vets here. And I am pretty picky about vets.

The first week we were in our new home, we had a fence contractor come to put up the necessary dog fence. He did a fabulous job, didn't charge us an arm and a leg AND he raised dachshunds. Miniature dachshunds! And he brought them with him. They stayed in his truck and you wouldn't know they were there except one peeked out the window as I walked by.

I asked about the dogs. (Geez, they were cute!) In that conversation I asked who his vet was.

His answer was (and I quote) "I wouldn't take my dogs to anyone but Harley Boos."

The first time I walked into the Arroyo Grande Pet Clinic I had three dogs in tow. All three were somewhat traumatized by being in a new place. And the staff at that place made them comfortable. They were quick, efficient and in love with every animal that walked into the place.

And then there was Harley.

This big, burly man with the gentlest hands and kindest voice.

He helped us keep TeezaButts alive and happy long past her life expectancy range.

Of all the times that we had to go to his place, only one was sad. But it tells the story of why we now drive 45 minutes to the vet.

We had just moved to the mountain. LadyBug and Mohawk had just turned 16. LadyBug had suffered at least two strokes that Harley and his team had helped her through. And she suffered another.

I came home around 5pm and the spouse was in tears. LadyBug was curled up in her little bed and Mohawk was beside her. He had lost the use of his back legs. (A hip condition that we had been treating but was not responding to that treatment) It was obvious that it was time.

At 5:30 I called Harley's place. They closed at 6. We weren't going to make it and the coming night was going to be painful for the dogs and us. I told them it would take us 45 minutes to get there and maybe a bit longer.

They waited. The vet, the ENTIRE staff waited for us to get there.

And together we said good by to Mohawk and LadyBug.

They had come into the world 10 days apart. From the age of 8 weeks they had been together.

Harley and his people respected that.

So today when Zelda needed attention, it was a no brainer.

We see one of the other doctors now but he is as gentle and caring as Harley.

(Oh, they sent Zelda a birthday card on November 15. She turned 14)
Posted by gizzylaw at 7:51 PM No comments:

On Flu season and Hobbies

Started out as a chest cold. Hacking an hewing my way through a day. Noticing that breathing is really a nice thing.

This will be over soon. I said to myself on day 1.

And today my skin starts to hurt and my joints ache.

Now I am a bit confused.

Is this getting better or getting worse?

I live in the middle of nowhere. Literally. (I use the term correctly. You would agree if you were here!)

We live at the last electric pole on this grid. That qualifies.

My point is that there is no one from whom I can get the flu!

Now it is true that THE KID has been hacking and hewing. Longer than me. So have some of our singers in VAE. But none had the flu! None have reported flu symptoms.

My guess is that Zelda is so pissed about her haircut that she had it flown in by carrier pidgeon! 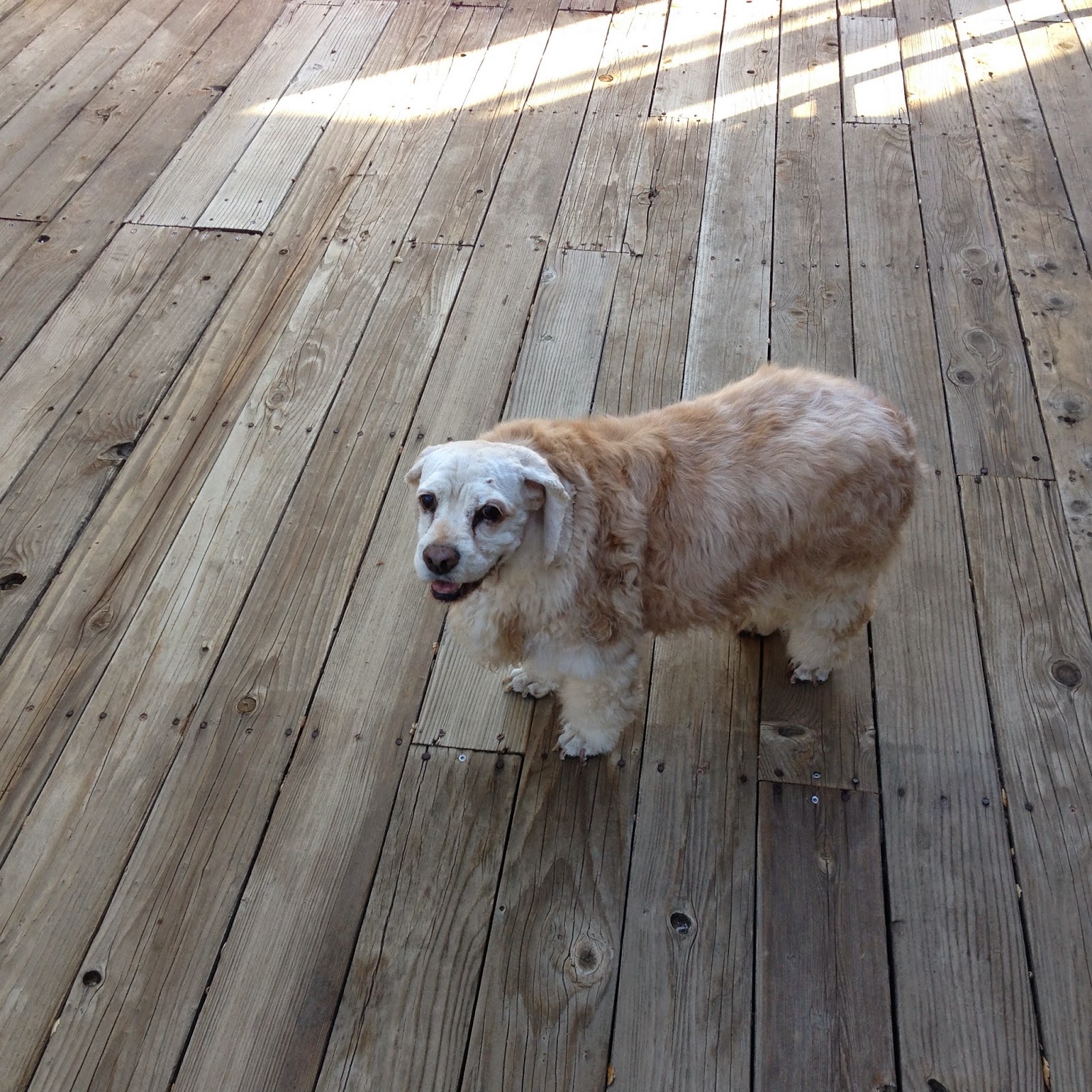 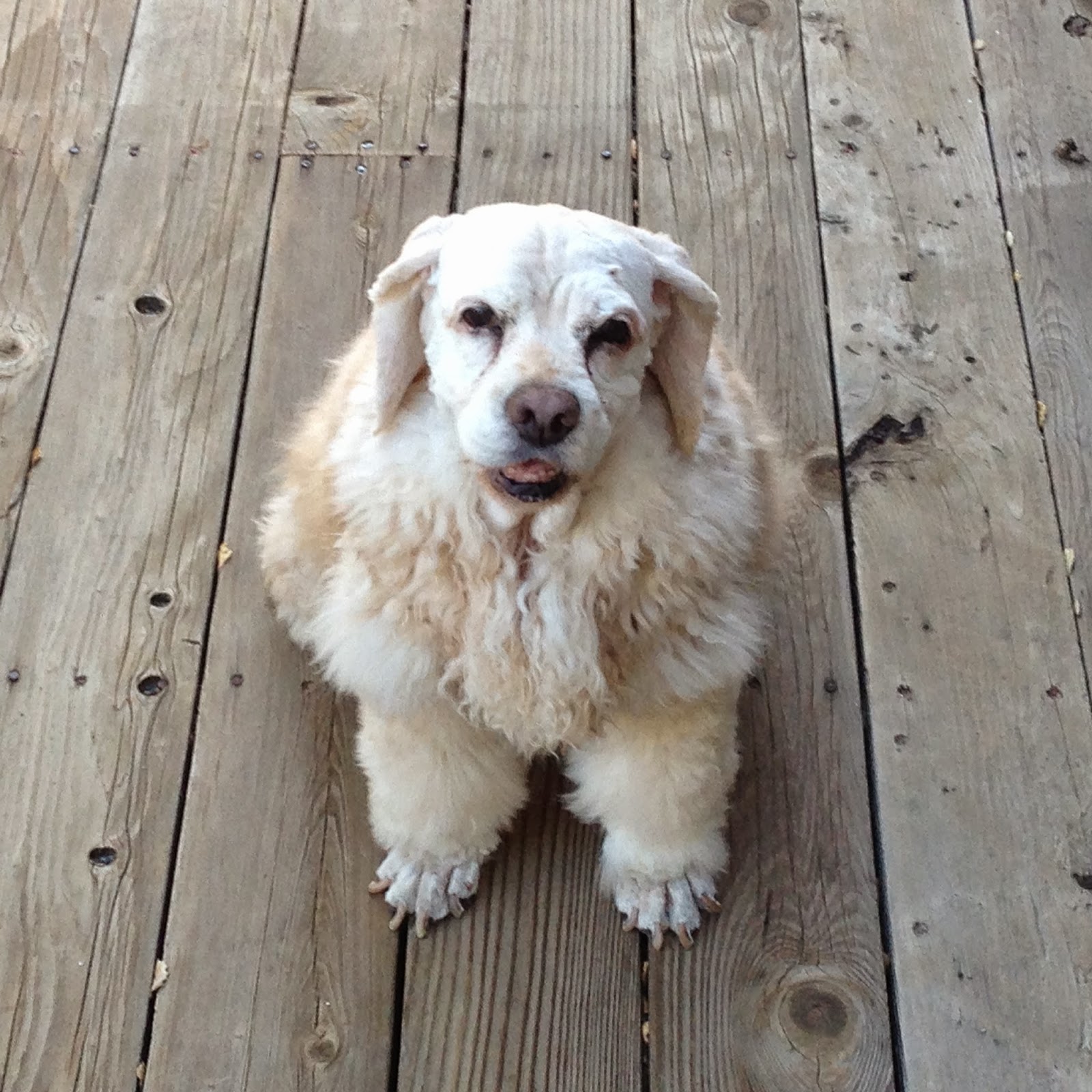 But that is another whole story and I digress.

I now feel like a fluey person that is getting better.

There has been a brighter side to this physical decrepitude.

I have been weaving. My new love.

I could do that while I hacked and hewed and even when I ached. (OK, it wasn't as bad as the flu I had in North Dakota in a73-74. But I digress again)

Today I finished the project that was on the loom. It is a scarf. (I am still into scarves until I learn a few more tricks of the trade!)

And here it is. 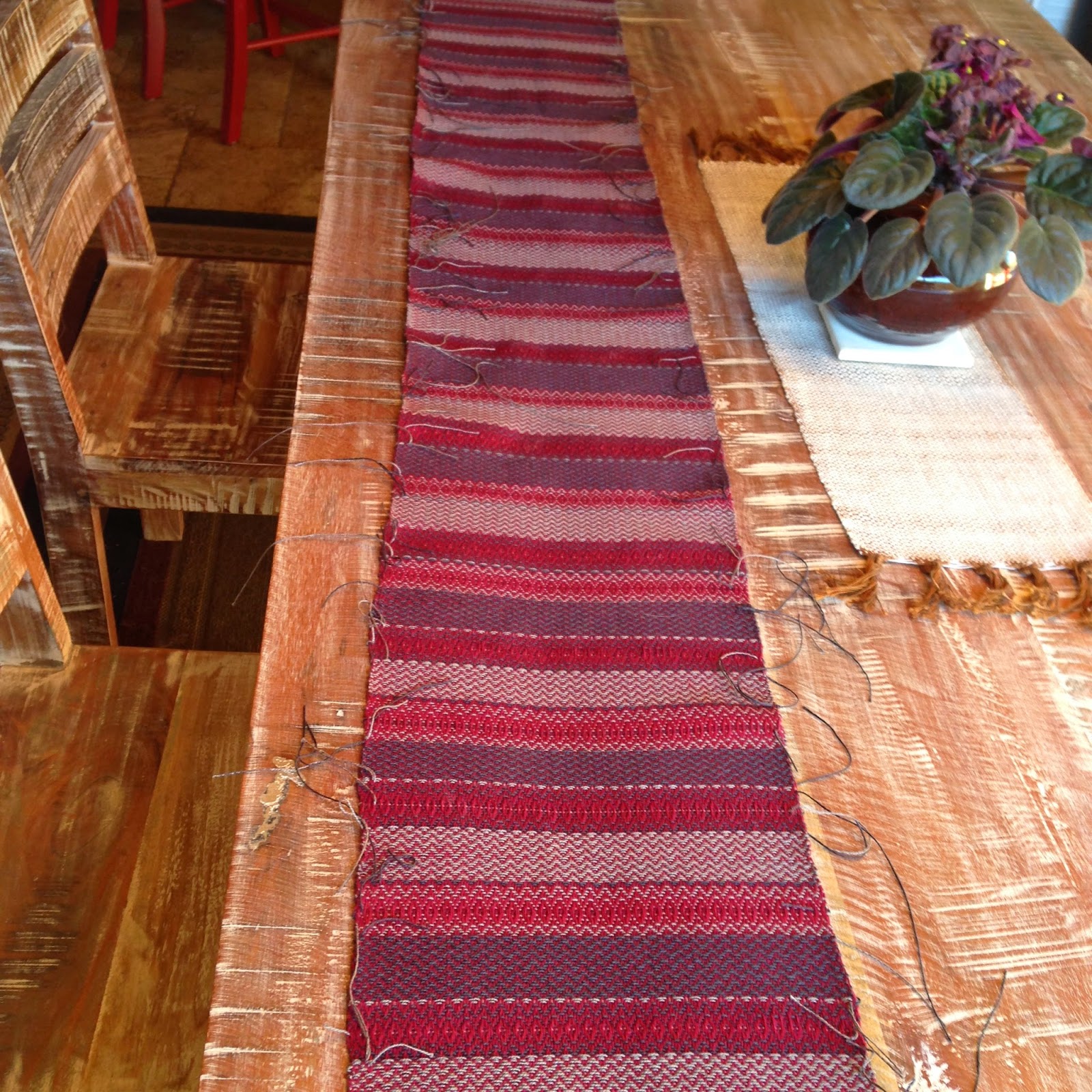 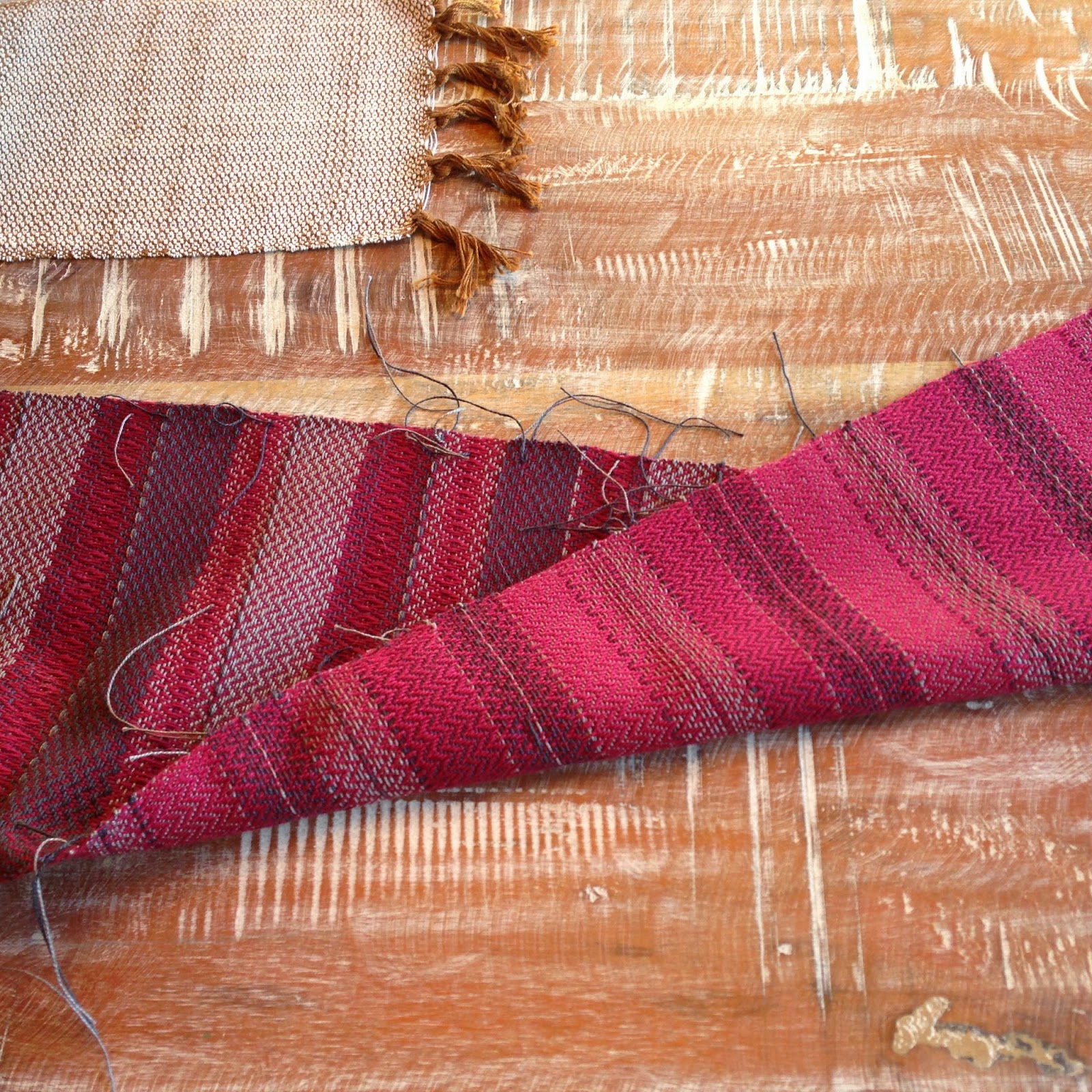 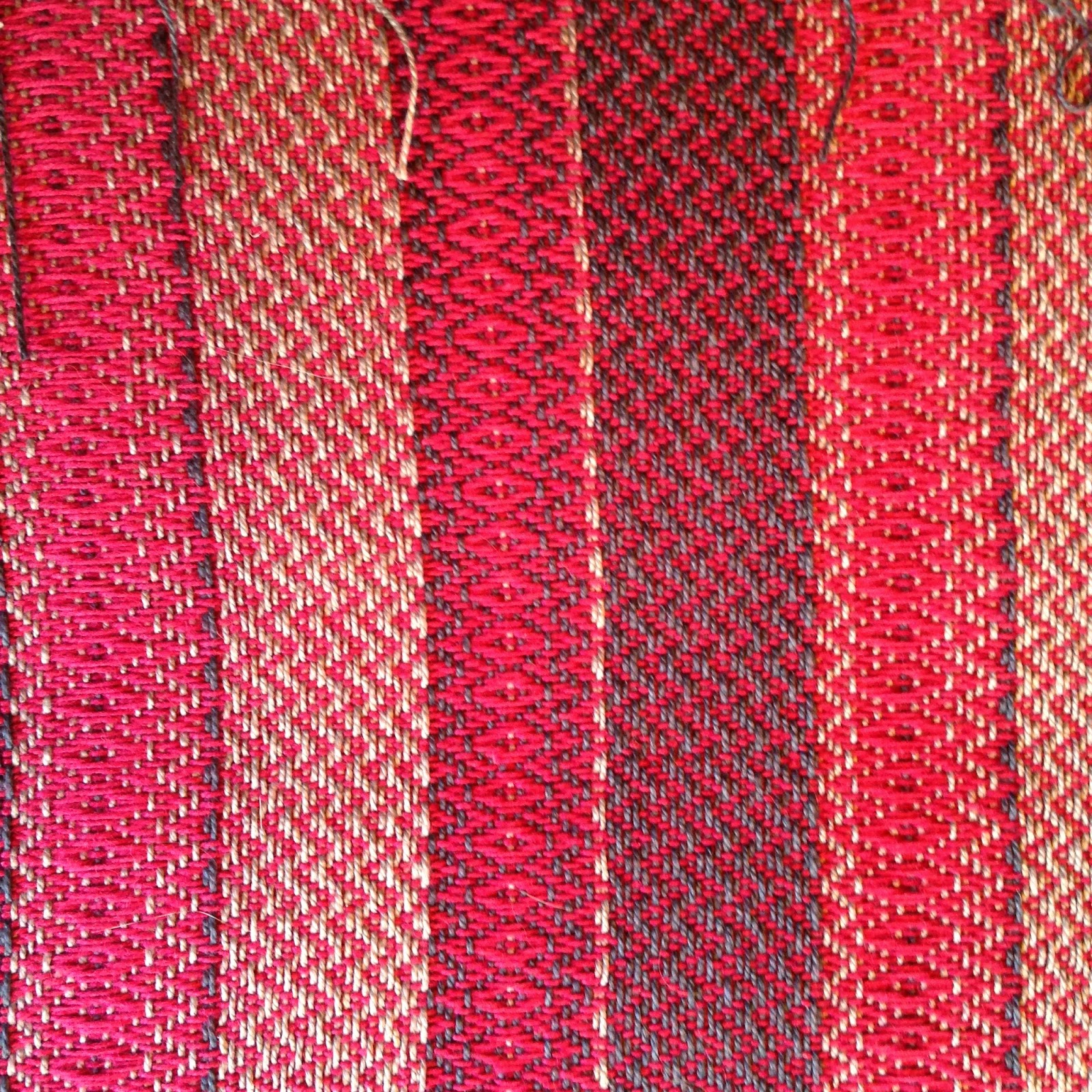 Yeah, being sick is a bummer. Unless you weave!