There is something very wonderful happening at my house.

You see, long ago, when Zelda came onto the scene there were several physical discussions about who was the leader of the pack. Mohawk was male leader (the only one, therefore...) but Zelda had issues about LadyBug's role.

It took some time to get them to tolerate each other.

Then we introduced two new cats. At the time we had a Russian Blue named Mithrander. A bundle of cuddle in a fierce body; Spot, a pure bred Cornish Rex; and Spot's niece, Lady Tiara Rex (better known as TezzaButts).

To say that the dogs were indignant about such intrusion would be an understatement.

So the divided house began.

Dogs had the kitchen and the family room.

Cats had the living room and ALL of the bedrooms including their own cat room.

And so it remained for many years and a couple of moves.

Then.....we bought the SMALL house. Mithy, Spot and TezzaButts had crossed the bridge so we were down to Diamond and Putter.

In the small house we gave them a cat room. But they had to share with me and my computer. That meant that the dogs had to be allowed in when I was there because, well,.......I am the Pied Piper of the pack.

You see we settled the discussions about leader by ME becoming leader.

The Cats didn't agree but they were being fed and the cat boxes cleaned so they really didn't care.

But yesterday, I found out how far we have come. 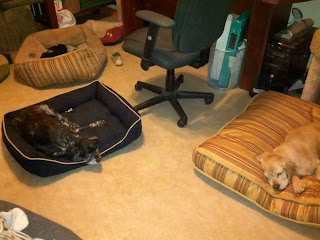 All three dogs. Asleep at my feet. No discussion about who sleeps where or when. 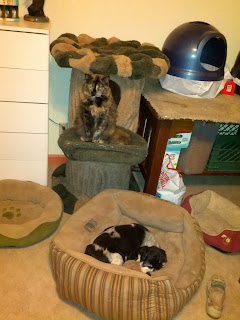 Putter languidly walking around and pausing to say hello to LadyBug! No hissing or growling. Just a very quiet "meow".

Oh, the little beds around LadyBug----they belong to the cats.

Long Ago But Not Far Away

Long ago, in another life and time, I packed up my belongings, my daughter and my cat and moved to Sacramento, California. My brother had found us an apartment on the edge of a very nice middle class neighborhood. I could afford it because it was next to an active train track!

The area had several advantages. First and foremost, it was safe for the kid. It had an elementary school only two blocks away. She didn't have to cross any busy streets to get there. It had a grocery store two blocks in the other direction. And it had people who were willing to babysit if necessary.

Thirty years ago, this month, that move happened. And thirty years ago this month, I met Joel. He was single, gay and just as terrified as I was. He was a bit younger than me but we hit it off. And we became best friends.

He was part of the infamous "tag team babysitting" team. He was an integral part of our lives. We watched the last episode of MASH together in the Student Union after our torts final. He taught me what a frittata was and how to make it. He helped me be proud of being me.

He moved to Los Angeles and I moved to Bakersfield. Our lives took different paths. He practiced civil litigation and then morphed into estate planning and probate. I was a Public Defender.

I hadn't seen him in almost 30 years.

Then I got a call today. "Hey, Giz wanna have lunch?" He was in SLO and wanted to see me. I JUMPED at the chance. And for the next 3 hours we talked and laughed and shared memories and new stories. He is still Joel. He is still my friend.

Joel, I love you. And Garret is pretty cool, too.
Posted by gizzylaw at 7:26 PM 1 comment:

Prior to moving into the middle of nowhere, just off the grid, and amidst the hills, I had never really come close to real, live wildlife. This is not to say that I had never seen wildlife at Camp Nelson. I did. Just not up close and personal.

There is the story of Mrs. Patterson (our next door neighbor at Camp Nelson) scaring off a bear. And there is the story of the bear breaking into our cabin. But I never saw a bear or a mountain lion. I did see a few deer from a distance. My mother warned me that they had ticks so I was not to get close. I didn't know what a tick was but mother made it sound very dangerous and dirty.

So when we first saw deer in our yard, I took to examining them (from a distance) to take in their natural beauty and grace. I learned that deer don't so much run as they BOUND. Boing, boing, boing, across the yard. 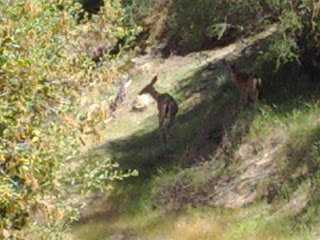 But I never imagined that I would be really close to them.

Over the last week or so, the weather up here has been in the range of 109-111 degrees. The streams and ponds have dried up. But we leave water in the bird baths for the birds and the squirrels. We didn't think that deer would come into our front yard for that water.

Over the last few days a herd consisting of two bucks, two does and two fawns has been hanging around the dry creek bed next to us. Last night the birdbaths were full. This morning they were empty. And this evening, we found out why. 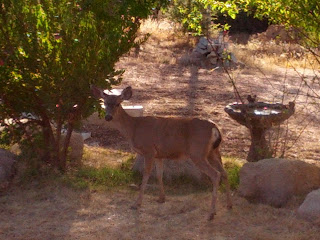 And deer up to the bar! 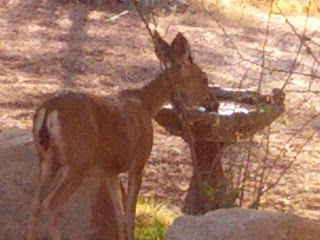 I now know why they are called Mule Deer. And I now know to keep the birdbath full!

The thermometer outside (in the shade) reads 111 degrees Fahrenheit.

It doesn't feel that hot until you get in the sun because of the constant breeze that we are lucky enough to get. But stay on the porch long enough (10 seconds will do) and you begin to say that the thermometer is probably right. 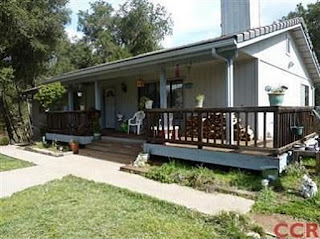 The neat thing (I was gonna say "cool" but then opted out of the pun!) is that the interior of our house is only 86 degrees. Thank you, previous owners, for the whole house fan in the attic. So with a couple of floor fans we are just fine.

The dogs sleep and wait for their potty breaks until it cools off. 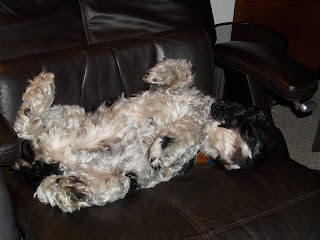 And it always cools off here. (see where the pun would have worked?) There is always an evening breeze that comes off the ocean and climbs the mountain.

And about this time of night the deer start their forays into the rosemary and roses. 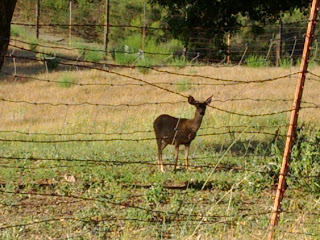