Trip of a Lifetime- Day 3

Our third day in France. We were hot and VERY tired. The heat and lack of circulation in our rooms made for a sleepless night and cranky people. But we had a concert at 9PM in Melages and a sightseeing stop on the way.

So on the bus to a castle and then to Melages.

For the life of me, I cannot remember the name of the castle BUT it was open for public tours with a guide whose family had owned the site for centuries. He keeps the castle open and tries to keep it in decent repair on the money he gets from the tours. France doesn't give him a dime. He was ribald and funny. In fact, Andy got his nickname of Mustache Boy from this man. Of course, he introduced Leigh to the"scoots" (French Boy Scouts). Out of this experience, we got a lot of good jokes and our mood was lightened.


Then it was off to Melages. This was the smallest of the villages with only 52 residents. We had been so well received in Le Truel that we were a bit encouraged and hoped it would be a nice welcome.

Now, as a general rule, eating before you sing a concert is not a good idea but the schedule had us eating first. So we crossed our fingers and hoped for the best.

We need not have worried at all. If we thought the reception in Le Truel was good, the reception in Melages was exceptional. Water--always bottled and always cold. Smiling, gracious people. And food galore.

For some reason, pizza was always the first course. That was followed by salted meats (prosciutto etc.) and cheeses and homemade breads. Then slices of pork, chicken and beef. And after you have stuffed yourself they brought out the rice dish. I don't know what all was in it but it was fantastic.

And then they tell us that everything we ate (except the rice) was grown in or near their town by local farmers. All the vegetables were grown in local gardens.

We ate outside at long tables and before we went to change for the concert, we sang for our supper. It is a tradition with us to do that. But this time, they sang back! Turns out that one of the organizers of the festival is from Melages and is a choir director! And one of our festival guides (young college students who went everywhere with us) was in his choir.

And then into the church for a short rehearsal. To say that we were stunned by its beauty would be an understatement. 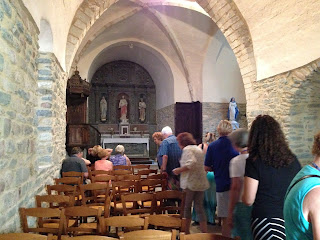 The acoustics were amazing. Of all the churches we sang in, this was my favorite. Small, intimate and filled with people who were outgoing and gracious.

And then a very tired and happy group headed back to our "hotel" in St. Affrique. Some more tired than others......


Just one night in Toulouse and we had to get on the bus. It was early and we were tired but we had to get to St. Affrique, check in at the hotel, rehearse and then get to the village of Le Truel for a 9PM concert. This was our first meeting of Jose the bus driver. He spoke only Castillion Spanish. His abilities in English amounted to the word "no". 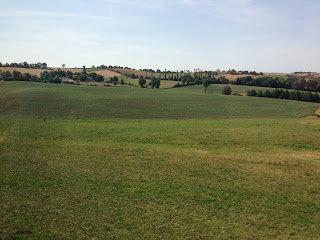 The drive out of Toulouse was on a major highway until we got to Albi. There a right turn into rural France. Some of the most beautiful areas that echoed our California rural areas when there is sufficient rain! Lots of small farm plots, no huge acreage covered in one crop as we do here. We found out that the French do not import food so everything you eat is grown close to home.

We finally had to stop at a small village for a "short" break. In Vocal Arts there are no "short" breaks. The public WC (bathroom) must be located and used by 40+ people. There must be a source of libation and consumables. And short exploration must happen.
But first, the WC.


To be fair, this is the only one I saw on the entire trip. But after relief comes the exploration. 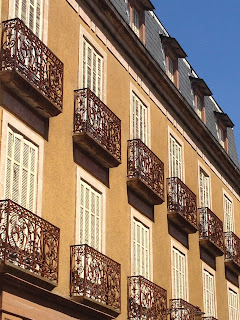 And a wonderful discovery.

A tiny village shows up to pay homage to its past and those that died in defense of there country. 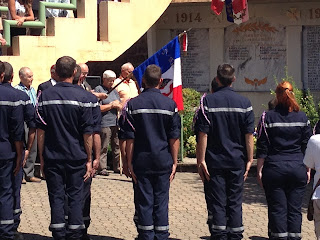 Every town and village that we visited had a memorial to those that died in WWI and WWII. 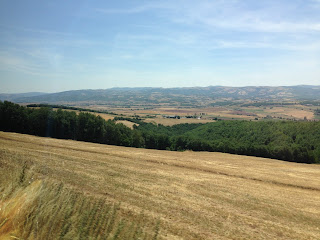 Then it was back on the road. More gorgeous landscapes and isolated houses. 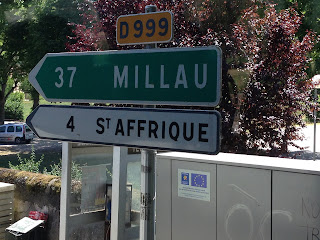 And finally St. Affrique where we rehearsed in their church, 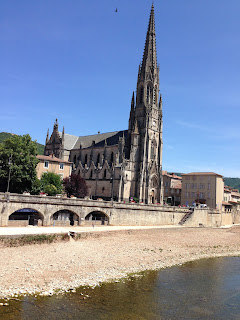 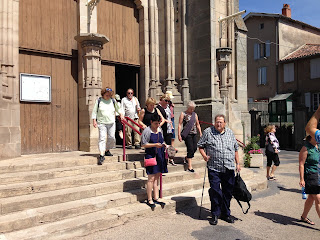 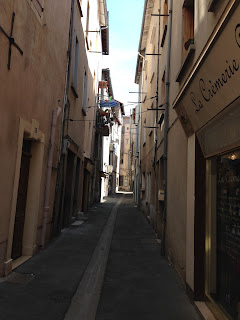 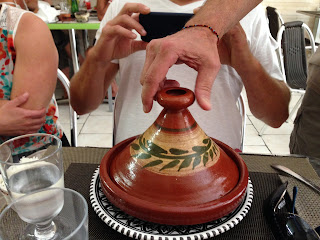 This was an amazing restaurant. Called Terres du Sud, it is the dream of a woman and her partner. He asked me not to print their names or their pictures to Facebook but asked that I show the food. You can find them on Trip Advisor.  They spoke no English and we spoke little French (Melodie was trying to remember her college French!) But the language of food was sufficient. I had purchased some yarn and left it in its bag by the table. The next day (yes, I am getting ahead of myself) we went back and she had saved it for me!


And then we are off to sing. I was a bit brain dead and forgot to take my phone so you are stuck with my descriptions. The village was Le Truel. Look it up on Google maps and use the street view. Getting there was a real adventure. Jose managed to get that bus down a steep road that makes Tioga Pass seem tame. But he couldn't get us very far into town. The roads were too narrow for a bus.

But the festival organizers were right there leading Jose to a parking lot by a town hall. In the hall, where we would eventually change into our uniforms, were festival staff with bottles and bottles of COLD water. The heat was really bad and we were sweating buckets so hydration was of chief concern.

The concert was scheduled for nine in the evening. So about 7:30 we change and head up to the church. Up a flight of stairs, down a narrow road and the church appears. It is overlooking the river and valley below and is exquisite. Made of stone in ages past it has a natural reverberation that was perfect for the songs we would sing.

To be honest, I didn't expect much of an audience. I was wrong.

The church was full to capacity. These people wanted to hear us. And we gave them a great concert. And they gave us a standing ovation! They stayed afterwards and communicated that they were emotionally affected by our music. They kept describing "goosebumps". They called it "chicken skin"!

Afterwards, their festival committee feed us pizza, smoked meats, cheeses, salads, bread, and deserts. And we sang for them. So much fun and such friendly, outgoing people. We were stunned and humbled.

Then it was back the hotel. I use that term VERY loosely. It was a converted dorm. Without air conditioning or fans. The tiniest of bathrooms (if you bent over in the shower you shut off the water!). Linoleum floors. Oh, and a nice patch of mold in the bathroom.

But it had a pool. Thank whatever.

In that pool, three of our bathing beauties performed Ode to a Grecian Urn. Marvelous! 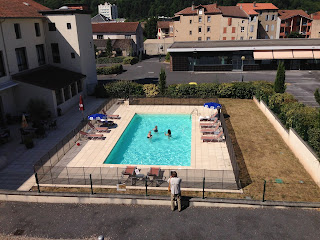 But again, I get ahead of myself. That was on day 3.

Trip of a Lifetime- Day 1 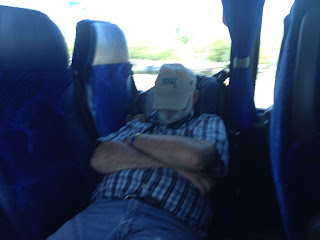 It began with a bus trip. Relaxed but very excited. I have promised to keep the identity of this person a secret. (yeah, right, John!) Our destination was LAX and a flight to London, England and then on to Toulouse, France. We left SLO at 1PM on July 12, 2014. Our destination would be reached at 11:30 PM the next day (with a difference of 9 hours!)

But first you must always wait.

And then we got a look at the aircraft. Holy whatever!!!! Please note the scale of the next picture and ask yourself the question I asked.....How does that thing FLY?
I never took a picture inside this behemoth because, well, we were in the sardine section at the back of the plane. Getting up required certain gymnastic skills. I slept very little on this flight. Excitement, adrenaline or maybe all the coffee I drank while waiting......Ya think???

Gotta tell you that airplane food on British Airways is pretty good. As a vegetarian I got my food first. Couscous and eggplant, peaches in cherry sauce, fresh apples, and other goodies.

A four hour layover at London's Heathrow Airport resulted in more food, a chance to talk to everyone and a little window shopping.

Then two hours after we boarded the plane to Toulouse, France, we were there. I was lucky to have a window seat and watched the fireworks from towns and villages celebrating Bastille Day. Really beautiful.

Our hotel was almost ready for us. A bunch of tired, excited Americans who were met my members of our choir who had arrived before us. The wine began to flow. Our next day would begin with a bus ride to St. Affrique. I think we all headed for bed and a little, well earned, nap.

Just for continuity I should mention that Melodie was "in charge" of wrangling. Her duties included making sure all parties had the necessary information to get from point A to point B. She deserves a Congressional Medal of Honor. At LAX it quickly became evident that even with proper instruction.....well, let's just say some of our people could be easily distracted.........