I have retired.
Done.
Finis.

With running a business and saving the world one client at a time.

Done.
(OK, for transparency--I do occasionally assist The Kid with the readin', 'ritin', and such)

I knew, when I decided to walk (actually run) away from 30 years of high tension, deadline based work (let's not forget the client's lives in my hands), I would have some free time.

I honestly cannot say what led to this determination and I feared that it would be like so may other forays into the arts. Let's see....

There were more but they all ended the same way.
I was simply unable to make my fingers go where my brain said to go. I became frustrated and quit each and every one.

Anyway, it was now the 20teens and I had grown aged a bit.

Then a loom fell into my lap. (see previous posts on this blog) I found a weaving class and...
off I went.

I had made the assumption that I should consider the weaving class as I did AA. Take what I need and leave the rest. I did this as I have never enjoyed the company of the people who were in the other art classes that I had taken. (I know, I know, I should be open to all people but I can be a bit of a snob when people don't know anything about government or insist that all lawyers are shysters....)

But this class was different.

Not only was I learning how to weave, I was learning at my own pace.

The instructor is not only a master weaver, she is a techy--having worked in the hallowed halls of Google, taught arts in the local schools and, in general, is an educated and erudite professional. Likewise for most of the class.

Politics and religion are NOT off the table for discussion. And it remains a discussion. When we talk.

Most of the time we are concentrating on counting threads or picks or heddles or dents. (Don't ask...)

After my first month, the instructor and I came up with a design for a scarf for me to weave at home on my own loom.

I have been working on this thing for awhile. With her help I worked through all the problems that can and did occur in this project.

Today, it came off the loom. 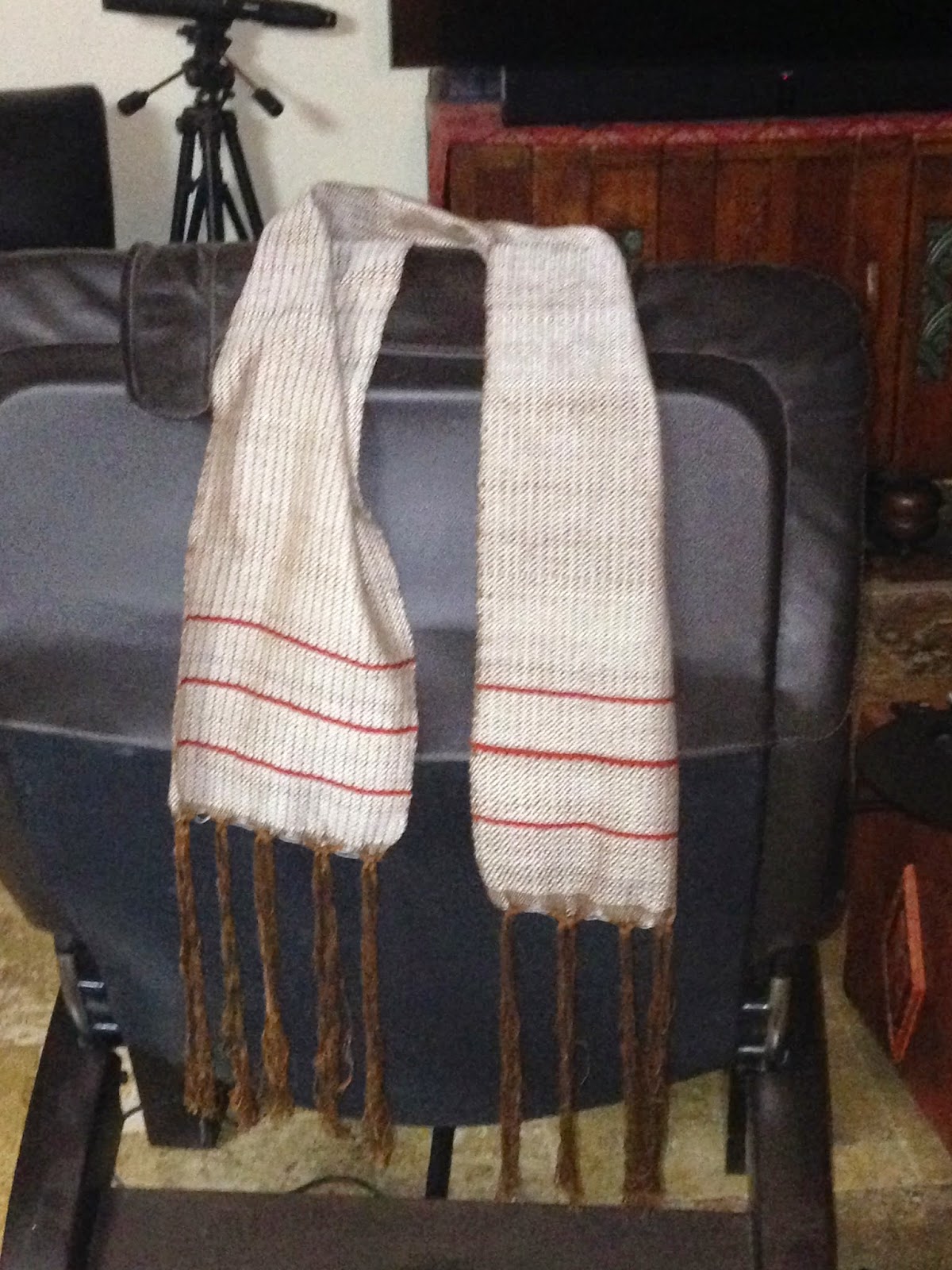 I am already planning the next project!

This is a blast.

I think I can use the word "domesticated" but PLEASE don't tell my spouse!
Posted by gizzylaw at 8:28 PM No comments:

I expected to have a big day today.

My last active case was set for the taking of a plea.

It has taken YEARS to hammer out this deal. And today was the day.

So, I got up this morning and went rummaging for my remaining suit.

I went through "workday" ablutions.

I went out to my car.

Hum......Back tire (driver's side) seemed low. I walk around the car. The front (passenger's side) tire was FLAT.

This was not good.

We live at the end of a mile long dirt road. It is then about 15 miles to the closest town that has the type of assistance that the poor Vibe required.

Not being totally stupid, we have a tire inflation thingy. Spouse starts that up and filled both tires.

In a suit, I carefully drive to the tire emergency room. (VERY CAREFULLY)

After the expert tire doctors look at said tires, they pronounce them hopeless. They recommend removing them.

One has a sidewall puncture. The other?

Well, the other was just too frail to continue.

While properly mourning tires that had been with the Vibe for less than 3 years, I was given the news that rugged, mountain taming tires are only made for monster trucks.

"What?" My little Vibe is not entitled to reasonable protection from potholes and boulders?  (Admittedly the potholes can be bigger than pots and the boulders can come in the small economy size)

But Vibe needed new feet. Vibe needed to make it to the grocery store and rehearsal in one piece.

So, she has new feet.

And she likes them.

And she will hum to rehearsal tonight.

I have only one question.

Why do the little "emergencies" always happen when payday is tomorrow?

Posted by gizzylaw at 4:08 PM No comments:

So I am minding my own business. Driving down the freeway to go have a "discussion" with Verizon.

The spouse's phone (which we just transferred from a now defunct business line) was working and then......wasn't. Could not make a call out or receive a call or text.

Two days before I had spent over 4 hours on the phone with "tech support" that resulted in a decision that it was a network problem. Got a ticket number and was told I would hear from those good folk in less than 24 hours.

At the time that I was driving down the road it had been 48 hours. I had called Verizon tech support back at the number given to me by the tech support people and was told----

the SIM card was the problem.

It wasn't. That had been established in the four hour marathon phone call.

So I am minding my own business, driving down the freeway to "discuss" the situation.

While doing so, I get an ache in my upper left chest area.

But I go to the store and attempt to confront the poor tech person on the floor. She deflects me very well and says: "This isn't a SIM card issue." DUH?

I begin the wind up to a true "discussion" when she says: "This phone wasn't coded correctly when you transferred it. This will only take a minute." She transfers the information correctly. Phone is fixed.

But I still have this ache in my shoulder.

Now THE KID has previously advised me that should such a pain occur and continue for any amount of time, I am to go to the ER.

She has advised me (in "discussion" mode) that failure to do as she has instructed will result in my demise. Demise either by what hurts or, surviving that, by her hand for being an idiot.

So I proceed to the ER.

First question: "Can we help you?"
First answer: "I hope not."
Quizzical looks.

"I have a pain right here."

Looks of understanding and immediate reaction.

Within 5 minutes I am in a gown, in an ER bed, and a very young, cute male child is hooking me up to an EKG machine.

A little blood work, an IV line, a little of this and a little of that and the doctor says:
"I don't think this was an infarction. But you are staying the night so that we can do further testing."

The pain finally goes away.

The entire crew is giving me praise for coming in.

Just to make double sure that the diagnosis is correct.