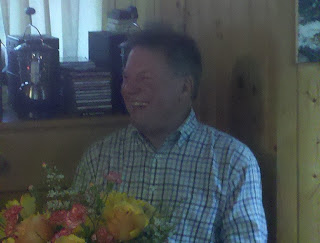 OK, both Bill and I were Christmas babies.

But he got the good side of Christmas.

Christmas Eve always has been and always will be BILL'S BIRTHDAY.

I come along 4 days later. When everyone is partied out.

I am sure, now that I am an adult, that Bill got the proverbial birthday/Christmas gifts just like me. But as a kid I was POSITIVE he got the good stuff and I was stuck with the one present problem. Let me tell you two cards on one gift does NOT cut it!

But, secretly, (please don't tell anyone this) I was all excited about Bill's birthday. It gave me a preview of what might be waiting under the tree and what might be coming a few days later. (assuming everyone played by the rules)

The rules were
1. No Birthday/Christmas presents
2. Birthday presents had to be wrapped in Birthday paper
3. Dessert was Mom's angel food cake with white frosting and sprinkles on both birthday days.
4. And I didn't get in trouble for ignoring Dan on my birthday. (Not allowed on Bill's although Bill could ignore him if he wanted then)

Bill's birthday always brought Christmas faster and brought lots of people to the house. There was always a ton of food and lots of decorations and lots of music.

It also meant that Santa came the next morning. I still don't know for sure who played Santa (although all of us kids had our guesses) But Santa came to each of our rooms the day after Bill's Birthday.

Now I just call him and sing Happy Birthday to him. He tells me what is happening for his day and I tell him what is going on with me.

We don't get to share Mom's angel food cake but, well, what we have now almost makes up for it.

OK. I am proud of THE KID. She slogged her way through law school and then gets the Valedictorian award. That is soooooo cooool.

And I knew when she started that she would have to study just as hard for the Bar Exam. We talked about it alot. My spouse bought her the BarBri program at the start of her last year. She used the podcasts to study for her classes as well as review everything else.

The plan from the beginning is that she would have to go somewhere other than home to study at a live BarBri program. Both Melvin and I agreed (as will anyone else who has passed the Bar) that you MUST take a review program and follow it to the letter. And BarBri is the one the is generally chosen.

I was lucky. When I went through this process, the program was offered at my law school. In the same room where I eventually took the test. I didn't have to move or go anywhere else for three months. I didn't even change my routine. I parked in the same place that I had been parking in for the three years prior. I ate at the same student union where I had always eaten.

But there is no program here.

She had a few choices and she chose San Diego. Her old friends are there and one of them had room for her to crash. And as she put it, "He does care if I ignore him."

So today she left for San Diego. With all her books and clothes and things she would need for a three month stint. To study.

It is a good and wise thing. We had discussed it often.

But I won't see her every day. My lunch partner and friend is away.

We use to live in different cities, hundreds of miles apart. We use to not talk on the phone all the time.

But we do now. And I treasure every moment.

I treasure her growth as well.

So tonight I am conflicted. I miss her (already) but I am so proud of her stamina and grit. I am proud that she is willing to do whatever it takes to make her dream come true.

I remember saying to a singing partner at rehearsal one night that I didn't think I would ever get over the awe that I feel when I watch her. He looked at me and said "Parents never do".

Guess I am just a parent.

Wow.
Posted by gizzylaw at 8:13 PM No comments:

TO EVERYONE THAT READS THIS:

1. I have this incredible daughter. 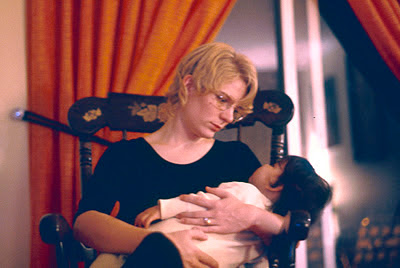 2. Despite her mother she grew into a great woman.

Just in case you don't know her, she is wearing the green sweater. And, yes, she has dark hair. ANd, yes, she is playing spoons!

3. About 5 years ago she and I made a pact. She would work for me and I would put her through law school if that was what she wanted to do.

4. For 4 years she has attended an on line law school. She had to study on her own and learn more than they taught. She did not have the luxury of classmate camaraderie or instant answers from upper class persons. Her class also had people who were attending the actual classes.

5. She did ask me and my spouse a lot of questions. Embarrassing as it was, we didn't know the answers anymore. (Adult>50=CRS(can't remember s**t))

6. She studied constantly and drove herself (and me) crazy.

7. She asked other attorneys questions which (thank god) they couldn't answer either.

And tonight she just got word:

SHE IS THE VALEDICTORIAN OF HER CLASS!!!!!!!

I have a friend named Josh. Let's get this out of the way---he is a lawyer. A CIVIL lawyer. He wouldn't know what to do with a criminal defendant.

I met him when I briefly worked at an insurance defense firm. (We all make our mistakes!) We became good friends.

Our politics, religion, life styles, and general points of view on life were at, and still are, polar opposites.
He hates cats, isn't real thrilled with dogs. Finds foul language foul and generally (at that time) lived the life of the bachelor Norwegian farmer. (Yeah, he is a farmer, too).

But he was great for bouncing legal issues around. He was (and still is) a walking encyclopedia of statutes and case law.

When he met THE WOMAN we (his close friends) knew her only as "Reedley" because that is where she lived. We could not get her name out of him no matter what we did.

Until they got engaged. Then you would think that we would have a chance to forget it.......No, got it in every sentence. It was soooooo cute!

I feared that once they were married that we would lose touch.

It turns out that a friend of Josh's is a friend for life. Foul language and all.

I just sat at a restaurant with them for over 2 hours. Overlooking the ocean. And talking. FOR TWO HOURS.

We will talk more tonight. They are coming to our concert.

He is an amazing friend. Even if his world view is what it is......

I still have time to train him, I think.
Posted by gizzylaw at 4:19 PM No comments: