Last night was a perfect night to relax playing mindless games and reading emails (and Facebook posts). I often do this just before I have to prepare the dogs for night-night. That ritual involves carrots and a trip outside.

But, as has been its wont, life intervened.

I was sitting at my white computer desk which was a table area attached to a cubicle bookcase. You know, the ones that have 12x12 squares to store all that stuff we seem to collect and never get rid of. I had a bunch of stuff in the cubicles and my printer sits majestically on top. The desk part held my laptop, a keyboard, a large monitor, a small Bose speaker and the land line phone. Oh, there is small desk lamp.

I have had this desk for the six years we have been in our home. It had served me well. (besides, it was cheap!)

Last night, the desk, hereinafter known as "it", decided to relax. Well, relax isn't quite the word...

It decided to COLLAPSE.

It let loose of its attachment to the cubicle bookcase and collapsed towards the floor sending all of the items it supported sliding towards the cubicle. This is because the other end of it was being supported by my chair. The armrests became desk rests.

The dogs, as is their wont, raised the alarm with a great hew and cry which roused the spouse.

After extricating me, I was left to disentangle the pile of electronics that it had left behind. This was a wise choice on the part of the spouse.

So today I purchased a much sturdier desk. Well, it is not called a desk. It is called a workbench.

I don't think this one will feel the need to relax. 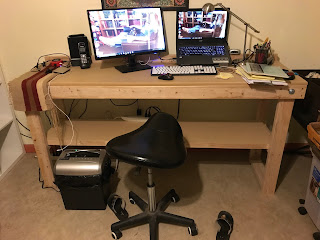