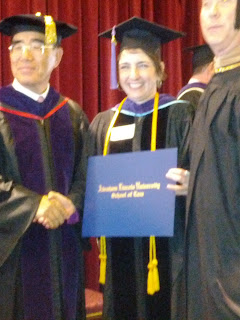 And she did it with flare, style and grace.

Oh, throw in a few ounces of guts and perseverance.

And then she gives her Valedictorian speech.

Now I KNOW that THE KID will come up with a twist to keep everyone's attention. She is really good at that.

But MR. ROGERS as graduation inspiration?

She can be quirky.

" When I thought about what brought us each to this particular point in time, I thought of Mr. Rogers who said........"Well, what is essential about you? And who are those who have helped you become the person that you are? Anyone who has ever graduated from a college, anyone who has ever been able to sustain a good work, has had at least one person and often many who have believed in him or her. We just don't get to be competent human beings without a lot of different investments from others.".....

Think about that and what it means to you. Who do you have to thank? We each have at least one person that invested in us and in our success. People that helped us choose our path and helped us walk that path, people who made us who we are. Maybe you came to Abraham Lincoln University because someone told you that you couldn't do it.
Personally, I blame my mom for my presence here today."

(At this point, tears are streaming down my face and I am sort of choking!)

"My mom is a lawyer, She didn't want to be a lawyer, but she was a single mother and felt that going to law school provided her with the best chance of making a living and a life....for me."

(FULL waterworks and Melodie is sniffling, too)

"So she went to law school when I was about 11 years old and I went with her. I attended her classes, went to the law library, and spent a lot of time waiting in the school's cafeteria. She was so busy with study groups and multiple jobs that "tag team babysitting" was invented. One of Mom's friends would babysit me for as long as their schedule allowed, , at which point another friend would take over as babysitter. I went everywhere they did. (I got to go to bars!) It was great fun.
I know those three years were hard work for my mom and her classmates. But I got to see law school: the students freaking out and running out of lectures, the study groups, and the parties after they'd gotten through their finals. Mom graduated, and

(at this point she chokes up and I just lose it)

26 years ago I walked with her across the stage when she received her diploma."

I was trying to film all of this on my camera. But my sniffles and shaking hands made it kind of, well, not good.

So I leave you with these photos, taken with a very full heart.

If this child is indicative of our next generation of leaders, then, I think, we will do just fine.