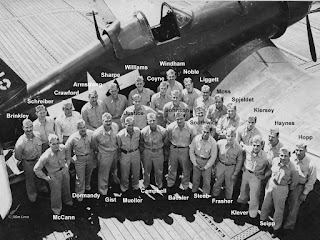 I met the guy in the front row of this picture in 1990. He was a retired Marine aviator. He retired as a "full bird colonel".

He was sitting in a plastic chair in a hospital room visiting his very ill wife. He had his legs crossed and his arms crossed over his chest. The body language alone told me to be VERY careful with this guy.

He was a Marine in every sense of the word. He showed no emotion. He got up to greet me and then sat down. Crossed his legs and arms again and I didn't say a word.

We (the now spouse and I) stayed in a hotel that night. There was a family dynamic that I was not privy to at the time which separated father and son. It did not please me.

I had met the man a few times after that and was not longer terrified of him. But we still were wary of each other when Lois (his wife) got very sick again.

This time she was on a ventilator and could not speak. But the men in the room kept asking her open ended questions! (Do you want the large or the small pillow?...) Remember that my mother was a nurse and I had been taught how to communicate in situations like this.

I continued on that way until I could pinpoint the spot where she wanted the pillow and I put it there.

It was near Christmas time and I knew that she loved that holiday and loved decorating her house. So I told her about my experience of trying to put up Christmas lights on windows with scotch tape. She reacted with delight. Eyes wide, trying to smile and patting my hand.

Lois didn't make it home but Dad Mueller observed and learned that day.

From that day on the formidable Marine aviator was my friend.

I had recently learned to play golf. It was a sport for which he and his son shared a deep and life-long passion. We began to go down to play golf with him. He took me as his partner every time. He NEVER criticized or attempted to teach me anything. We just played.

One year he made a driver for me. Best club I every swung. I actually hit a 250 yard drive with it once!

But my favorite story about Dad Mueller had to do with my brother Dan.

Dan and I were staying at Dad Mueller's house in Oceanside. Our father was dying of cancer and under hospice care in Escondido. Every day, Dad Mueller would either cook us breakfast or take us out to his favorite breakfast restaurants. He believed that we needed good fuel to get us through each day of our vigil.

On one particular restaurant the server made the mistake of placing the bill between Dan and Dad. Dan grabbed the bill (as his father had taught him to do!). Dad Mueller looked at Dan and said, "Give that to me, please." At which point Dan (being the smartass that he could be) replied, "Why should I?"

I SWEAR I could see the eagles rising up from Dad Mueller's shoulders. (No, he wasn't in uniform and there were no gold eagles on the clothes that he was wearing!) But Dad Mueller straightened to attention, turn his eyes to Dan's and said (very quietly), "Because I asked you to, son."

Dan handed him the bill.

Dad Mueller flew Corsairs in WWII, he flew helicopters in Viet Nam and he flew in Korea. He served at the Pentagon.

Like most who served in war, he rarely spoke of it.

He could be very strict.

But with me.....we shared a little golf, a little dinner, a glass or two of wine. And we laughed a lot.