He is my big brother. He is all that that title conveys. I have held him up as an idol, the perfection that I believed him to be. And then I realized what an incredible burden that placed upon him. The separation it caused in our relationship. The judgement that it cast upon him.

And, slowly, I let that fairy tale slip out of my thoughts and off his shoulders.

He is my brother. My blood. The family that shared my childhood.

And tonight, like a few days this last summer, I got to be with him and share in his joyous family.

It started with a walk on the beach, watching whales breach the horizon. Listening to his stories and telling mine. 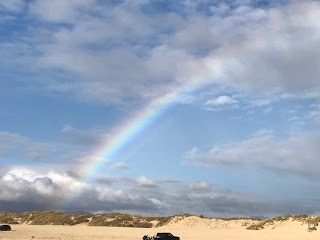 But the fun had only started.

I had been invited to the 45th Family Weekend of my sister-in-laws family. This year it was held in a B and B in Arroyo Grande. A home converted to guest house use with sufficient bedrooms and bathrooms to accommodate the entire clan.

And then there was dinner. A wonderful meal prepared by my sister-in-law's brother-in-law. (Got that? My brother's wife's sister's husband.) Salmon fillets and mushroom risotto. OMG!!!! Oh, I forgot to mention a hot shrimp and cheese dip appetizer. Lord, save me from all the calories I consumed! 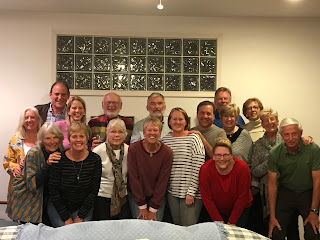 Many of the folk I had met before but some were new to me. One thing they all shared was a love of each other and a curiosity about the world around them.

I was asked about VAE and touring with that group. I told them about singing in Santa Trinita Church in Florence, Italy. I told them about the amazing food we were fed by villagers in France. I told them what it was like to share those experiences with my daughter. And they, in turn, told me their stories.

It was a wonderful few hours with my brother.

I will treasure it forever.