Up at the cabin (Camp Nelson) there were always critters. Bobcats, deer and Bears, oh, my!

There were mice (by the millions), squirrels, moles, gophers, mountain lions, snakes (only a few), skunks, raccoons and other such things.

Most of them avoided us big, clunky, loud humans. We made no sense to them except when we left out the garbage or the birdseed.

But in the towns along the Central Coast you see fewer of them. They really do avoid the human world and run when they are approached in any way. (Well, the bears and cats don't run so much. But the littler guys do!)

So when I arrived at my usual Monday night rest stop in Santa Barbara (Thank you, Ramada Limited for keeping a room for me when I forget to make the weekly reservation!) I was a bit surprised to see a critter in the bushes in front of my parking spot.

It was well hidden and at first I thought it was a cat. But it was startled as I got out of the car and it looked at me. It was not a cat. 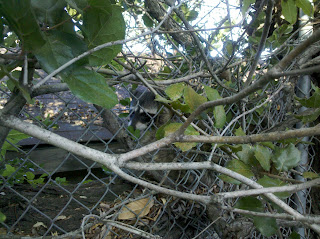 I barely could. So I crept a little closer. And I got this one. 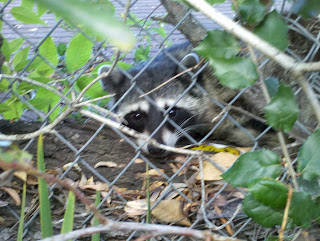 It appeared to be just a little raccoon and he just stared at me. He didn't try to run. Of course it was daylight and not his favorite time of day.

I asked the management about him and they told me he had been in the area for quite some time. I was relieved because that meant he was on home turf and was not hurt.

He just wanted to go back to sleep.