Trip of a Lifetime- Day 10 Competition 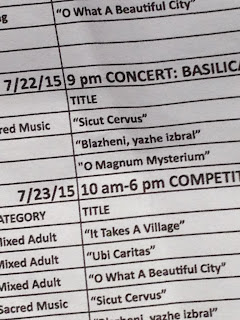 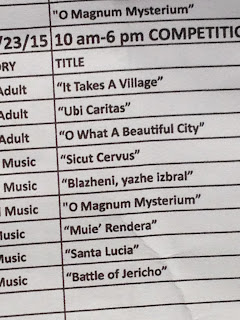 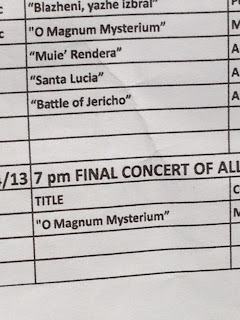 We FINALLY got some information from the Florence International Choral Festival (aka FICF). We still weren't sure WHERE we would sing but now we knew that we were in the program!.

We left Genoa earlier than we had originally planned. Seems that Jose the bus driver had to make it from Florence to Rome for his next assignment and he only had so many hours to make it. So, we quickly learned the catch phrase for the rest of our trip----"There is a change in the program!"

There wasn't a lot of picture taking on this part of the bus trip. Many of us were pulling out our music and working on the little things that make us better.

After two days of not signing, Gary spots a church steeple and had Jose pull into a small town where we found the church, walked in and started a rehearsal.


We thought we were in trouble when the priest came in the door. He apparently had been told that a lot of strange people had entered his church and were singing. He tried to get Gary's attention while we were singing. Gary was far too engrossed in the music to see the poor man off to his right.

After about a minute (we kept singing) the priest walked off and started preparing for an upcoming mass. He finally came back out, got Gary's attention and pointed to his watch. Gary got the hint and we made for the exit. Mass was about to start.

We were all glad that we got some rehearsal in as we were to sing at the opening ceremony that day. We were looking forward to that ceremony. Each choir at the festival was to sing one song which sounded like fun to us.

When we got to the hotel we were told to change into our uniforms and a guide from the festival would come and escort us, on foot, to the venue. We were told it was close by. Well, it sorta was.

Mind you, the Duomo of Florence was less than a block away from our hotel.

The Piazza della Signoria is a few more blocks away in the opposite direction. Our venue was the Palazza Vecchio that was located in the Piazza. In the heat, it was a bit of a hike. We were drenched an thirsty by the time we got there. Also, half of us had lost sight of our guide when we got to the Piazza. We started looking for anyone wearing the red lanyard with the badge of the festival.

We finally found a door where there was such a person who motioned us into the building. Which was FULL of tourists. And none of them in our choir uniforms. I am beginning to get a bit anxious when I spot a black tuxedo near the stairs. The third section (that had lost sight of the group I was with) had come in another door and were equally lost.

Finally, a festival volunteer comes down the stairs and waves us up. We count noses and we are all there. We enter a large room full of frescos with a roped off area that has chairs. Other choirs are sitting down and so we go to do the same. It is then that we find out that we are suppose to be in the waiting area as we are to sing second on the program.

The waiting area is a hallway with no chairs (no water either), the Estonian choir, us and tourists getting from one area of the museum (that's what it was) to another. It was crowded and very, very hot. The program started at least a half hour late but by that time, I wasn't checking the time. I was trying not to melt completely. The nylon lining of our uniforms was now a skin-tight body suit.

We finally get on stage to sing. We sound pretty good from my vantage point but the room was not made for music. But that is ok because this is just the warm up for  tomorrow's competition.

We exit the stage and head to some empty seats. Lo and Behold, there are backpacks and music and lots of other personal items on the chairs. The organizers had not anticipated that all the choirs would come to the opening ceremony and had not put out enough chairs. We were told to put the personal items on the floor and sit anyway. Not being stupid, we declined to do so.

We scattered to whatever available seats we could find only to be told that "you can't sit there" by other festival officials. The choir before us and all those after us kept their seats. We stood.

It was a very unwelcoming feeling especially after the magic of France.

We trudged by to the hotel, stripped off our uniforms, jumped in a cool shower, dressed and WALKED to dinner. And that was fun. It was our whole group in one room being a tad loud and enjoying each other after a VERY tough day.

And in our room was another singing group from the festival. I believe this group of women was also from Estonia but I could very well be wrong. I am sure that they were annoyed with us as our group was over 40 people and they were about 10-12.

So when it got towards the end of the meal, we, like we do, began singing some of our songs.  We started off with Joshua Fit the Battle of Jericho. Yup, it's loud and fast and fun to sing. The women's group applauded and we begged them to sing one of their songs. We didn't know their language but eventually they got the point and sang back to us.

Their voices were heaven.

Right behind John (that the only guy at our table. He has a beard....) is one table of the Estonian group. The other table you can just see at the far left of the picture. (above Noah's head). Singing to each other was such a treat.
And then it was trudging back to the hotel for a much needed and well earned bit of shut-eye. The next day was the reason that we had traveled so far and worked so hard. We all wanted to make Gary proud of us.