Trip of a Lifetime- Day 5 (aka cheese and chickens) 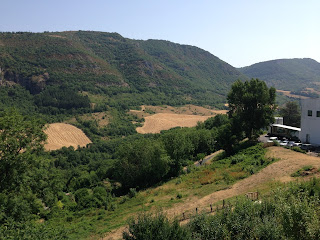 Our sightseeing today was something I really wanted to do. In researching (Googling) I found that near St. Affrique was the town of Roquefort. Yup, THE cheese.

We bussed out early for this little town and saw some great scenery along the way. But when we got to Roquefort our bus driver informed us (thank heaven one of us spoke Spanish! Thank you, Delia!) that he could not take us all the way to the place we would be touring. He had to park the bus at the bottom of the hill.

Mind you it feels like a million degrees and it is muggy. I don't mind a bit of a hike but uphill for nearly a mile is a bit much. We had people with breathing issues and walking issues and heat issues but everyone who got on the bus that morning made it to the cheese shop!

To be fair, there was a woman there trying to translate for us and she conveyed the gist of the film. She was to be our guide into the caves. I was really looking forward to being in a cheese cave.

So she takes us the room where we think we are seeing the cheese. The white wheels are fake. Plastic. For show only. All of their cheese is out of the caves and being sold. More cheese will be put in the caves after the sheep start giving milk again in the fall. It isn't cheese season. (I should have Googled some more!)

By the way, the bread mold is what is used to make Roqufort cheese!

And then we learned that even if they had cheese in the caves, we couldn't go in the caves. They are on seven stories and entry and exit changes the temperature and humidity that the cheese needs to become cheese. Who knew? (the cheese maker, of course)

We did get samples to try which were very, very good. But I was told that they did not ship the cheese for two reasons. One, the cheese must be kept refrigerated and two, the cheese goes through NO pasteurization. It cannot be sent to the USA!

Some of our folk didn't hear about the refrigeration requirement until AFTER they had purchased cheese. Our next few nights of "wind down" were remarkably well stocked with Roquefort cheese!

So it was back to St. Affrique to prepare for the night's concert in the town square. We were sharing the concert with a Spanish children's choir that was VERY energetic and quite good.

(And just for the sake of clarity, the bus picked us up at the front door. I believe the bus driver was told that his tip was in jeopardy....)

When we got back to the "hotel" after our sound check we discovered a few fowl things in the parking lot. They were the advance parade for the Tour de France which was passing through the town of Albi about a half hour away.

Apparently, these chickens (and vehicles with large caulk gun replicas on their backs) travel at about 20-30 miles an hour in front of the Tour. They throw out caps and t-shirts and CHICKEN WINGS to the bystanders. They don't slow down to do this.

I cannot for the life of me figure out how you catch a chicken wing that is thrown at you from a vehicle doing 20-30 miles an hour! Gee, Mom, the chicken knocked me out!?!?!? 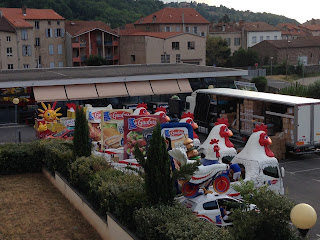 The chicken carts led to the GREAT CHICKEN HAT CAPER.....I don't know who or how or why but a lot of us now have chicken hats.