Trip of a Lifetime- Day 4 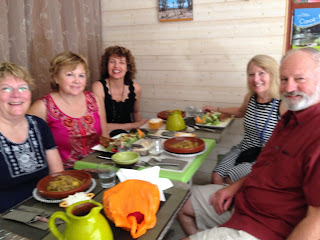 The day must start with food. This is, after all, the California Vocal Arts Ensemble and we know how to eat! (You should see our potlucks!) We went to our favorite St. Affrique restaurant where we were greeted by the chef with the package of yarn that I had left there the day before. (note orange bag) We were treated like royalty and left with hugs and three cheek kisses and a promise to come to our concert in St. Affrique which was scheduled for the next day.

But then we had to rush off. Our sightseeing tour of the day was a Knights Templar fortification.

Now, normally I am not a fan of touristy sights. I almost always feel that they are inauthentic and dull.

Not this one. Well, it had its touristy shops here and there but they were tucked into buildings that had been standing since forever! We got a quick tour of the place with a guide and then went off on our own to explore.
It is still hot and sticky and the bus ride made a few need the facilities! We figured that we would be walking a bit but we had no idea how BIG this place was.

The streets were tiny with many twists and turns and some of the stair were very well worn. When you think about the number of years that those stairs have been in existence and the number of people that have stepped upon them your mind kinda reels. Hundreds of years of human existence!

But, as is the want of Vocal Arts, we made our way to the chapel. Located at the highest point of the settlement the view is amazing. Inside the stone walls were plain but the acoustics were fabulous. So, of course, we sang. Guerrilla concert style. Just standing wherever and listening to the sound of our voices echoing off ancient walls. I cannot describe the sound or the feel. It is one of the best memories.

After we sang, we began to explore. I saw this windmill across a little ridge. It was clearly part of the city as there were other fortifications on that side. There was a lookout platform of rock nearby that you could climb to but I was much to hot to make the effort. (I claim old age but really I was just being lazy)
So I take a break at the local gelato place. It was situated in a cave at the bottom of the structures. I took pictures not only to show the cave but to show the artistic bent of most of the vendors there.

And then we were off again. This time to the village of Cornus (Kor-noo). It was time to sing for our supper!
The only place that our bus could park was in a large field. We shlepped our uniforms and stuff to the community center and waited for the person with the key. After we all put our stuff down we headed (at least I did) for a little creek that ran along the side of the building. It was 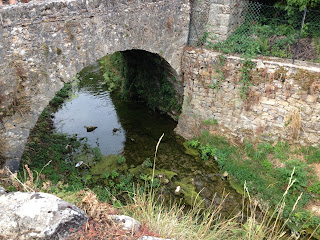 The creek was charming.  We were hot and our feet were swollen from heat, travel, and assorted other reasons. Mine hurt they were so swollen so the thought of a walk in the water was very appealing. 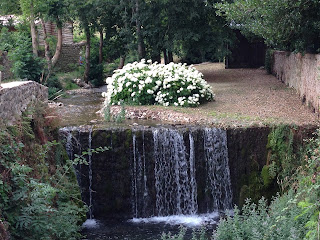 So I found a little "beach" where I headed for a bit of relief. 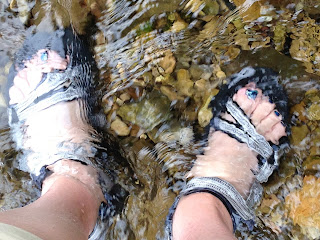 And I was followed shortly thereafter by fellow sufferers!

The water was cold but my feet wanted to stay forever. And the beauty was beyond description (how often can I use that phrase?)

Then it was off to the church for a quick rehearsal. To say that this small church was stunning is an understatement. Bright yellow walls that made the place warm and inviting. And the acoustics were perfect.


On our way back we discovered what the entourage does while we are working so hard. 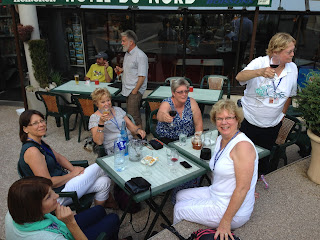 We were warmly and enthusiastically welcomed by the people of Cornus. I didn't get any pictures because I was so busy talking to some women in their 80's who wanted to let us know how much they loved our singing. The translations got a little muddled but the feeling was there.

This was our last concert in a small village.  The warmth that we felt from these people was unbelievable. Language was not a barrier. Music was our language. And a smile goes forever.

I love these villages.
Posted by gizzylaw at 9:45 AM