And it was goodbye to Marseille. We didn't get a chance to actually visit the city. Two concerts and on to Italy.

We left early like 8 or 9 am and people were a little cranky. It was still hot (although it was really nice to sleep in air conditioned rooms!) And it looked like a long ride to Genoa. 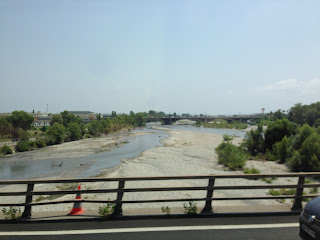 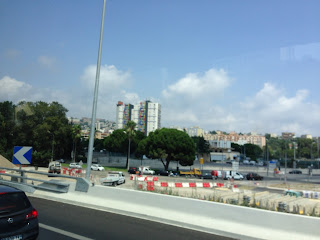 THere was beautiful scenery on this part of the trip. The Mediterranean was on our right and we caught glimpses as we traveled by the towns and citys at its edge. That was when we weren't going through tunnels! We saw Cannes and Monaco and all the posh cities. I just can't tell you which was which. 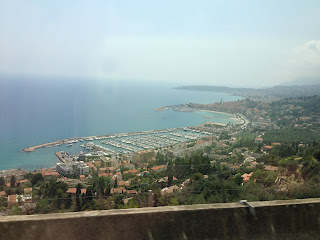 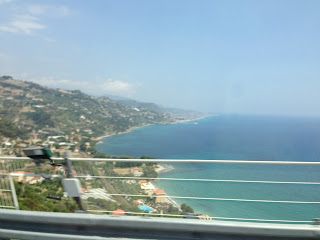 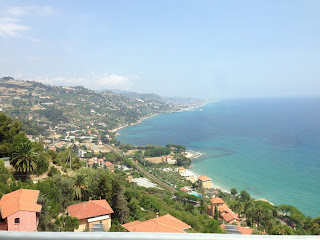 When we get to Genoa (at least the outskirts) we were greeted by a goat. Ah, the hills are alive and it's really frightening.........(Sorry, couldn't resist) 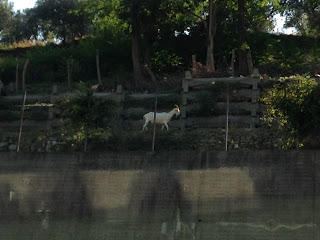 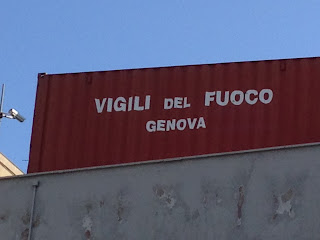 And we got off the bus in central Genoa and entered a fairyland hotel. The Hotel Bristol was a welcome site. It quaint lobby and its grand staircase.


And here is the grand staircase. I never went to the top or took a picture looking down but I was mesmerized by the view from the lobby. WOW! 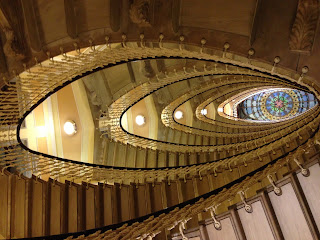 We had gotten the schedule for the competition in Florence and many people (including me) reviewed music and even sang on the way to Genoa. Then Gary said-no rehearsals. Six days in a row was enough. We all decided to have sectional rehearsals and fix any tiny things that might be bugging us. The tenors decided to do that on the next day.

So off to see the city! 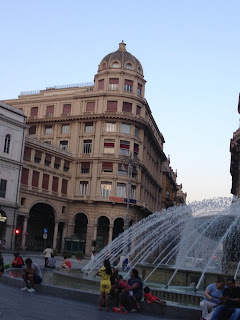 Our exploration was spurred by the desire to find the restaurant that the front desk had told us was good. But Italy doesn't like street signs much and we weren't sure of our directions in the first place. And, just so you know if you every go there---the map doesn't get you anywhere.

We saw narrow streets full of people and an incredible church. Getting lost is a wonderful way to find out about a city. 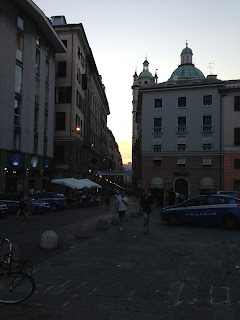 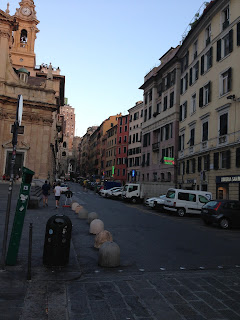 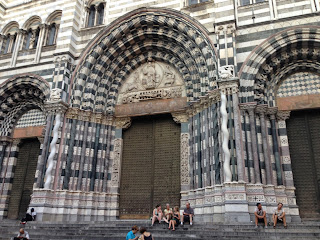 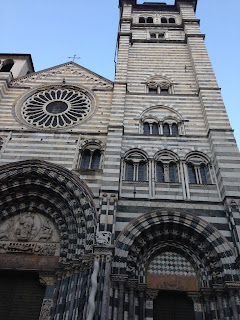 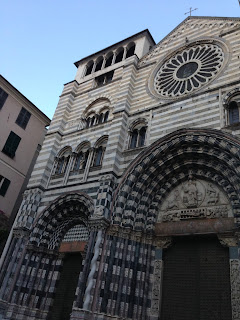 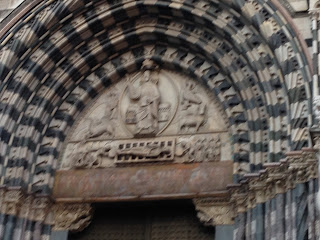 But the kid and I ended up back at the hotel for dinner. And it was grand.

The next day was scheduled for an optional bus trip to Cinque Terra which is part of the Italian Riviera. The kid and I decided to pass on another bus trip and, instead went shopping.
Just be forewarned. Shopping for close in my current size is difficult, if not impossible, in the central part of an Italian city. I was trying to find an upper body undergarment that would allow me to where the white blouse that I had packed. The only other such item that I had matched our choir uniform (black) and I was not about to make a new fashion statement.

We kept wandering until we found the gate to Old Genoa. We met a couple from Canada who were trying to make sense of the map. Their comment was that we would get totally lost if we went into the old city.

So, of course, that is where we went. 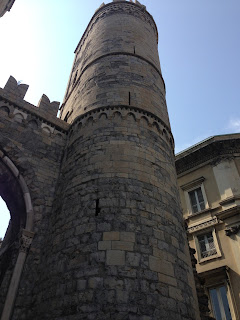 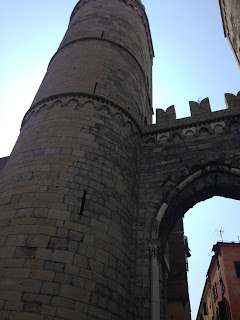 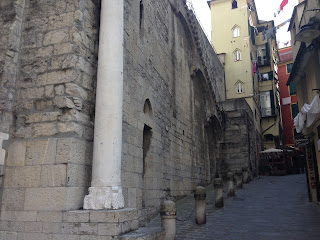 I took a few pictures of the wall and turned around to see ELVIS! In GENOA!
Sitting outside a tavern at the entrance to the old city. Had to take his picture! 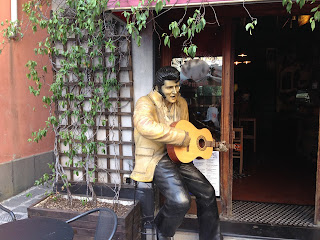 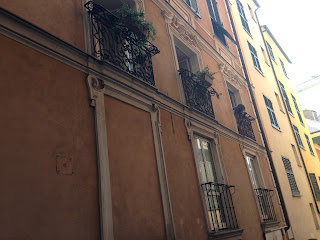 One thing I noticed in Genoa were the flowers on the balconies. In France there were lots of balconies but few plants or flowers on them. Italy seemed to have more.
There were stores in every nook and cranny. From nail shops to butcher shops. Vegetable shops and fish markets. You name it, there was a shop in the old city. Small and intimate, it was not a touristy place. Probably because the streets were so tiny and people actually lived in the apartments. 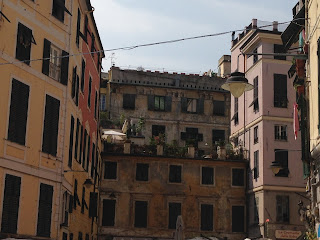 One the way back to the hotel, we found a treasure. This was a museum/church. It was open for worship but also for visiting and taking in all the frescos and statues and paintings. The art was astounding. 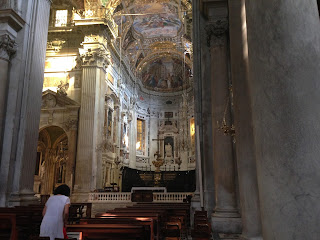 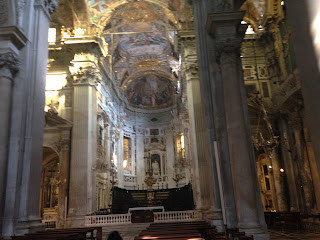 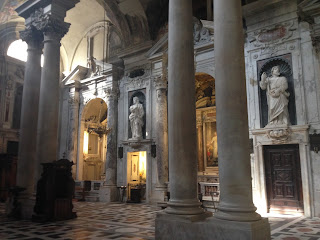 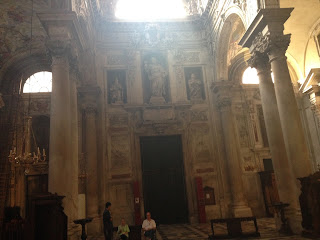 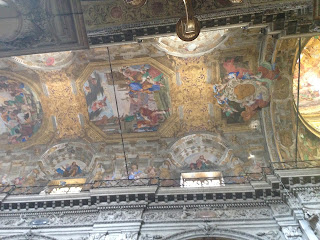 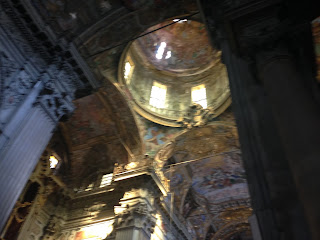 And we found private gardens tucked in the most unusual places. 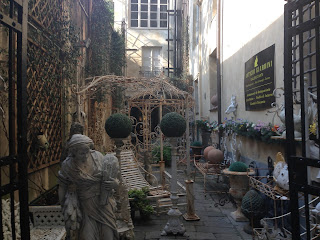 Then it was home to the Hotel Bristol and a good nights sleep before we headed to Florence and the international choral competition that awaited us. 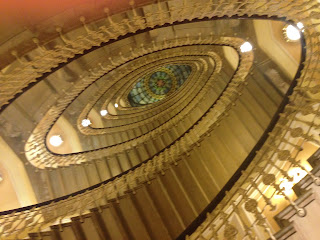